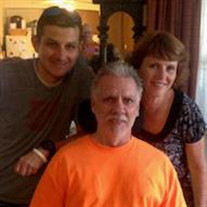 Kirby Eugene Ward, age 67, of Hilliard, Ohio, was called home to be with Jesus, his Lord and Savior on January 1, 2021. Kirby graduated from North High School, attended Ohio State University for a short time, played UBA football as a youth, was a member of Zion Evangelical Lutheran Church, later attended Redemption Lutheran Evangelical Church, worked for Accuray and Stanley Steamer, was a long time member of The Ohio Bottle Club, and was a volunteer at the Ohio Food Bank. The pride and joy of Kirby’s heart were his son Jeff and his grandson Dominic. Kirby loved spending time with his son talking about classic cars he restored, his antique bottles, and his bottle digging adventures. Kirby enjoyed spending time in solitude with the Lord, reading the Bible, and listening to Christian speakers. He also enjoyed spending time with his dog, Emma, who brought him much pleasure and companionship. Kirby was an amazing Christian man, father, grandfather, brother, uncle, friend, and neighbor to all who knew him. Kirby never met a stranger, always had a smile on his face, and was always there to listen to you whenever you needed someone to lean on. Kirby faced many challenges physically over the past several years with being diagnosed with Muscular Dystrophy and having a stroke. He never complained, instead leaning on the Lord for his strength and peace. He has now left his wheelchair behind, and is running through the fields of heaven. Mother Betty Miller, father John Miller, sister, Janice Herman, and nephew Lewis E. Herman III preceded Kirby in death. Kirby will be greatly missed by his son Jeffrey David Ward, grandson Dominic Ward, brother Kevin Ward, sister Karen (Eric) Bomgardner, sister Debra (Marshall) Salyers, brother-in-law Lewis E. Herman, many nieces, nephews, aunts, uncles, cousins, and his dear friend and caregiver Fran. Family and friends may call at RUTHERFORD-CORBIN FUNERAL HOME, 515 High Street, Worthington, Ohio during visitation hours on Saturday, January 16, 2021 between the hours of 2:00-4:00 p.m., followed by a memorial service.

The family of Kirby Ward created this Life Tributes page to make it easy to share your memories.

Send flowers to the Ward family.