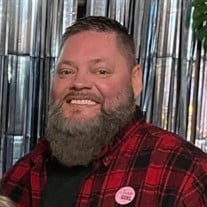 Kevin Anthony McCarty of Plain City, Ohio took his last ride to heaven on Friday, December 31, 2021, at the age of 49. He was born to Judy McCarty on October 29, 1972. He was a loving husband, dad, son, and grandpa. Nothing brought him a bigger smile than when he was with his kids, friends, and family. He was over the moon and so proud of his first granddaughter Ila Maria who was born in July. Riding his Harley was not a hobby or a need, it was his passion. Kevin and his wife, Angela, loved their motorcycle trips whether they were planned or spur of the moment. They made countless memories with day trips and week-long adventures, near and far. His favorite trip was always the ride to Daytona for Biketoberfest. He was extremely selfless and loved helping others. Without hesitation he would give his last dollar to anyone while never expecting anything in return. Kevin had a tough exterior, but don’t let that fool you. He was known for being a little rough around the edges and slightly stubborn, but secretly he was a soft, gentle man who protected everyone that he loved with a huge heart of gold. Everyone knew he was an avid The Ohio State Buckeyes fan. Nothing else existed when the Buckeyes were playing, and he never called the state up north by name. He loved camping, the beach, getting tattoos, hunting, and was a grilling fanatic. Kevin worked at COTA, Central Ohio Transit Authority, as a Vehicle Maintenance Supervisor. Over the 13 years with the company, he was known for his smile, patience, and simply being a great man. He was a 1992 graduate of Franklin Heights in Columbus, Ohio. Undoubtedly, he will be greatly missed by all. 49 years on earth was not simply long enough. He is survived by his wife Angela (Cole), his son Michael McCarty (Natasha) of Chillicothe, Rebecca McCarty of Dayton. Bonus kids Alexis, Riley, and Kelsey McKenna of Plain City. Sisters Michelle (Tim) Bates of Columbus, Wendy Malone of Columbus, and Heather Harpst of Columbus. Brother Mike Edie of Columbus. Visitation will be held Thursday January 6, 2022, from 2pm-4pm and 6pm-8pm at Rutherford Funeral Home at Powell, 450 West Olentangy Street, Powell, Ohio. A memorial service is scheduled for Friday January 7, 2022, at 10:00am at the Rutherford Funeral Home.

Kevin Anthony McCarty of Plain City, Ohio took his last ride to heaven on Friday, December 31, 2021, at the age of 49. He was born to Judy McCarty on October 29, 1972. He was a loving husband, dad, son, and grandpa. Nothing brought him a bigger... View Obituary & Service Information

The family of Kevin Anthony McCarty created this Life Tributes page to make it easy to share your memories.

Send flowers to the McCarty family.