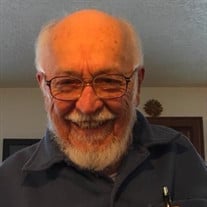 Joseph (Joe) Edward Andres loved his wife, God, the Catholic Church, family, his country, OSU football, Jeopardy, and Scrabble. Born as a twin to Anthony and Frances Andres in 1931 in Youngstown, Ohio, he was the oldest son in a family with four sisters and two brothers. As a young child, he attended the morning Mass in Polish. Following high school, he enlisted and served in the Korean War. Sergeant First Class Andres completed two degrees at Ohio State, in business from the College of Commerce and a J.D. from the Law School. During this time, he married the love of his life, Eleanor D’Amico, in 1957. Joe worked as in-house counsel for Shoe Corporation of America (SCOA) and Hills Department Stores until his retirement in 1996. Summer vacations were spent traveling as a family visiting national parks and historical memorials in most of the 48 continental states. He had an extensive catalog of trivia and poetry memorized that he could recite at any moment. In 2002, he and Eleanor expanded their travels to sail the world with Semester at Sea. Joe was a member of Immaculate Conception Parish, and his devotion to his faith was evident in his service and reverence. For much of his life, he attended mass daily, delivered meals, engaged in prison ministry, sponsored new Catholics, and was a member of the Knights of Columbus, St. Vincent De Paul Society, Catholic War Veterans, Serra Club, American Legion, VFW, as well as the Columbus and American Bar Associations. Joe is survived by his four children and their families: Mary (Mitch), John (Annette), Bob (Tina), Matt (Lisa), and his eight grandchildren: Stacey (Rhett), Lauren, Megan, Joseph, Zachary, Archer, Aidan, and Avery. He is also survived by his brothers John and Tony (Emily). He was preceded in death by his wife Eleanor in 2019, his parents, and sisters: Mary, Frances, Charlotte, and Ann Andres Cassidy. Joe was grateful for his life and to be united with Eleanor in death, with hopes for a better future for his grandchildren and the world they would inherit. Mass of Christian Burial 10:00 AM Tuesday, January 26, 2021 at Immaculate Conception Catholic Church. Livestream is available at https://vimeo.com/event/317101. A Celebration of Life will be held at a later date when restrictions are lifted. Donations can be made to Immaculate Conception Catholic Church

Joseph (Joe) Edward Andres loved his wife, God, the Catholic Church, family, his country, OSU football, Jeopardy, and Scrabble. Born as a twin to Anthony and Frances Andres in 1931 in Youngstown, Ohio, he was the oldest son in a family with... View Obituary & Service Information

The family of Joseph E. Andres created this Life Tributes page to make it easy to share your memories.

Send flowers to the Andres family.