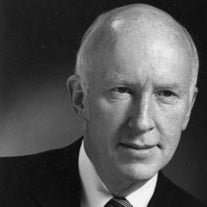 John Bloom Roberts, M.D. passed away in Columbus, Ohio on June 9, 2022 at the age of 92. He is survived by his wife of 65 years, Carrole Ann Miller Roberts; daughters Lisa Carrole Roberts (John MacDougall) and Christine Lee Roberts Stevens (Robert Stevens); and grandchildren, Ryan Noel Stevens, Tanner Alexander Stevens, Carmen Lisa MacDougall and John Roberts MacDougall. Born in Pocatello, Idaho to Dr. Edward Newman and Florence Bloom Roberts, he was the last of five siblings who have predeceased him. Dr. Roberts had a long and distinguished career as a Professor of Orthopaedic Surgery at The Ohio State University College of Medicine. He was a graduate of Stanford University and Northwestern University Medical School; and he interned at Cook County Hospital in Chicago. In 1958 he moved to Anchorage, Alaska with his young wife and seven-day-old daughter where he served as a Battalion and Flight Surgeon in the United States Army. He then moved to Columbus, Ohio where he completed an Orthopaedic Residency program at White Cross, Riverside and Children’s Hospital. He spent the next 40 years as a surgeon on The Ohio State University faculty until his retirement in 2008. It was in his role as an educator that Dr. Roberts had the greatest impact. He was greatly respected by students, faculty and staff; during his tenure, he was involved in the training of nearly every graduate of Ohio State’s Orthopaedic Residency Program as well as hundreds of surgeons. Since 2000, the Dept. of Orthopaedics has given the John B. Roberts Award for Excellence in Orthopedics to an exemplary OSU medical student. He served for many years as an oral examiner for the American Board of Orthopaedic Surgery; and among his many awards was honored as Orthopaedic Educator of the year in 2001 by the OSU residents. Dr. Roberts left his mark in other ways as well. In 1975, he was one of four surgical faculty who financed a $50,000 insurance policy on behalf of 60 interns and residents who would otherwise be unprotected from malpractice suits pending new legislation. He wrote and presented numerous papers; and in 1976-77 he served as President of the Ohio Orthopaedic Society. He loved travel, art and music, with a special fondness for classical music and the Ohio State Marching Band. In recognition of his outstanding contributions to OSU’s Dept. of Orthopaedics, the John B. Roberts MD Endowed Fellowship Fund was established in 2012 to support residents’ research rotation. In lieu of flowers, donations can be made in his memory to this fund (reference #482262) by giving online via this link: https://www.giveto.osu.edu/makeagift/OnlineGivingDonation.aspx?fund=482262; or by mailing checks to The OSU Foundation at PO Box 710811, Columbus, OH 43271; or by calling 614-292-2141. A memorial service will be held on Friday, June 17 at Rutherford Funeral Homes, 515 N. High St. in Worthington, OH. Visitation will begin at 2:00pm with services at 3:00pm.

The family of John Bloom Roberts M.D. created this Life Tributes page to make it easy to share your memories.

Send flowers to the Roberts family.