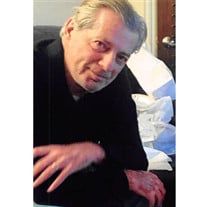 John M. Mills, of Columbus, OH, passed in peace September 18, 2020. John graduated from The Ohio State University with a degree in finance. He was a Buckeye fan through-and-through. John is preceded in death by his son, Alexander Mills; and father, Gerald Mills. He is survived by his mother, Betty Mills nee Weakley; his beloved wife, Rebecca Mills; step-sons, Christopher and Nicholas McCoy; sister, Marty Frye; brothers, Jerry (Linda) Mills and Jeff (Bridget) Mills; and 3 cherished grandchildren, Hannah, John, and Maddie. A faithful furry companion, Sammie, fifteen years old will miss her master. John still holds the high-jump record at Lakewood High School where he graduated. John was a member of Phi Kappa Tau fraternity at The Ohio State University. John was the President of Fiesta Salons, Inc. for many years. John was appointed by the Governor of Ohio to the Ohio State Board of Cosmetology. He also served as Vice President of the International Chain Salon Association for many years. He was an accomplished futures trader and received many World Cup Championship of Futures Trading awards. John was also a contributing author of “Secrets of the World Cup Advisors” on futures trading. Afterwards he became a successful options trader. He was an avid golfer. John traveled the world, visiting 54 countries. He served in the U.S. Army, becoming a First Lieutenant. John had a life-long affection for Buckeye Lake. As a member of the Buckeye Lake Yacht Club, he faithfully played poker with a close group of friends every Friday night for over 20 years. Family will receive friends and visitors Thursday, September 24, from 5 to 8 PM at RUTHERFORD-CORBIN FUNERAL HOME, 515 High St., Worthington, OH, 43085. Funeral services will be Friday, September 25, 11 AM, at the Funeral Home. John was a distinguished businessman who’s success was only eclipsed by his family’s love.

John M. Mills, of Columbus, OH, passed in peace September 18, 2020. John graduated from The Ohio State University with a degree in finance. He was a Buckeye fan through-and-through. John is preceded in death by his son, Alexander Mills; and... View Obituary & Service Information

The family of John M. Mills created this Life Tributes page to make it easy to share your memories.

Send flowers to the Mills family.