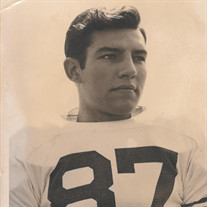 John William Martin of Powell, Ohio, age 87, passed away on May 8, 2021. John was born November 11, 1933 in Columbus, Ohio to the late Mary Margaret Kinkade Martin and William Andrew Martin. Retired Planning Administrator, The Ohio Department of Transportation. He graduated from North High School in 1951. Attended Capitol University. He played football for North High School where he was All-City and played for Capitol University. In 1955, he enlisted in the Air Force and was eventually stationed at Ellsworth AFB in South Dakota where he met and married his wife, Judith. An avid competitor and sportsman, he was given his first Labrador Retriever in 1965. Soon after, he became interested in the sport of Retriever Field Trials. He owned only nine dogs in his competitive years. He was unique in the sport in that he raised and trained them himself with his wife and friends. Four of them became Field and Amateur Field Champions, and unheard-of record. Three of them were “double-header” winners. Those are dogs who, with the same handler, win the Open All-Age stake and the Amateur All-Age stake on the same weekend. He is a member of the Double Header Club with these three. His dogs qualified and ran in 37 professional and amateur championship stakes in his career. In 1981, he is the only owner/handler from Ohio to win the National Retriever Championship with NFC/AFC Orion’s Sky. That is the professional national as compared to the Amateur National Championship where only amateurs can compete. NFC/AFC Orion’s Sky was introduced to the National Retriever Field Trial Hall of Fame in 1994, and John was inducted to the Hall of Fame in 1997. He is a long-time member of the Ohio Valley Retriever Club and Maumee Retriever Club, and a lifetime member of the Engineers Club of Columbus. He was preceded in death by his son, Michael W. Martin and his parents. He is survived by his wife of 63 years, Judith Beck Martin; brother, James A. Martin (Cherie) of Fenton, Michigan; daughter-in-law, Carrie Anne Martin of Fredericksburg, Virginia; and grandsons, Ryan Martin and Kyle Martin (Jaslin) of Virginia; and nieces, Marianne Martin of Boulder, Colorado, Deborah Martin of Breckinridge, Colorado, and Stephanie Martin Strohl (Clint) of Park City , Utah. Contributions may be made to Hospice of Central Ohio, 2269 Cherry Valley Road, Suite A, Newark, Ohio 43055 or Field Trial Hall of Fame, Attn: Tanya Brotherton, 505 West Hwy. 57, Grand Junction, Tennessee 38039. Friends may visit at the RUTHERFORD-CORBIN FUNERAL HOME, 515 High Street, Worthington, OH 43085 from 2-4 PM and 6-8PM on Wednesday, May 19, with a Rosary service at 7 PM. Requiem Mass will be held 10 AM, Thursday, May 20, 2021 at St. Leo Oratory, 221 Hanford St., Columbus, OH, 43206 with Rev. Cannon David Silvey officiating. Interment at Pine Street Cemetery, Gallipolis, Ohio following.

The family of John William Martin created this Life Tributes page to make it easy to share your memories.

John William Martin of Powell, Ohio, age 87, passed away on May...

Send flowers to the Martin family.