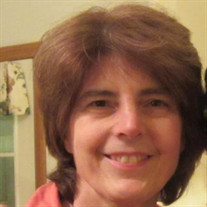 Family and friends mourn the passing of Joann Pickup Harvey, 67, of Powell, Ohio. Born in Warren, Ohio, Joann attended Warren G. Harding High School. She graduated from Miami University with a Bachelor’s Degree in Accounting, and earned her license as a Certified Public Accountant. She completed an MBA at The Ohio State University, specializing in Finance and Accounting. Joann worked for several years as a CPA for Peat, Marwick, Mitchell Accounting firm in their Columbus OH office, before taking a position as a faculty member in the Department of Economics at Ohio Wesleyan University in Delaware, OH, where she and her family lived for many years. Joann joined the Ohio Wesleyan University faculty in 1981 and in 1982 was appointed as a full-time assistant professor. She retired in 2010 as a full professor, holding the Homer E. White Foundation Professorship. The honor had special meaning for Joann as her immediate predecessor in the position was her friend and colleague Professor Uwe Woltemade. Joann received many other honors during her tenure at OWU, including the Sherwood Dodge Shankland Award for the Encouragement of Teachers in 1993, and at her retirement, the Adam Poe Medal. Joann achieved professional success at PMM and OWU where she specialized in tax practice and audits. While at OWU Joann expanded the Accounting program and added specialty courses of interest to her, such as Federal Income Tax and Financial Accounting. She was the first woman to chair the Department of Economics and served the university in other capacities such as the Faculty Personnel Committee, University Governance Committee, and the Committee on Intercollegiate Athletics. Notably, she was a supporter of several OWU Scholar-Athletes and recognized for her contributions. Consistent with her character, Joann extended her philosophy of servant-leadership and her expertise in tax law to serve the OWU and Delaware Community. She started the Ohio Wesleyan chapter of VITA, Volunteers in Tax Assistance, an organization that provided tax preparation services to people in Delaware. She was a member of the Department of Economics Team that worked for the Ohio Department of Taxation to examine the state’s sales tax. She advised the City of Delaware as it revised its Income Tax Code and was an active member of the Delaware City School’s Financial Review Task Force. Her service to the community also manifested itself through her active participation in Zonta International, and as treasurer of a local investment club. Joann was a long-time member of Asbury United Methodist Church in Delaware, and formerly a member of the First Baptist Church in Warren, OH. She joined her husband, Rick Harvey, as a founding member of Wedgewood Country Club in Powell, OH. Joann was preceded in death by her beloved husband, G. Richard “Rick” Harvey. She is survived by children Jennifer and Matthew (wife, Angela Harvey), granddaughter Maren Harvey, and siblings Carter Pickup, Jr. and Janet Pickup Anderson. Survivors also include her nieces, Amy F. Pickup, Michelle O. Pickup, Leisa Stephens, Tyna S. Norman, and Trisha S. Leija, and other extended family. A private interment service has been held. A celebration of Joann’s life will be held at 1:00 pm, August 14th, at Gray Chapel on the campus of Ohio Wesleyan University. Joann was a beloved wife, mother, sister, friend and colleague and will be greatly missed, yet lovingly remembered. As a faculty colleague of Joann’s wrote, “What started with a sample lecture by a young accountant with no teaching experience, resulted in almost three decades of excellent teaching, service to the University and local community, and many colleagues who benefited from her wise counsel and good cheer. We thank her for all she has contributed.” Donations in memory of Joann can be made to these organizations: The Joann P. Harvey Accounting Award Ohio Wesleyan University The Woltemade Center for Economics, Business & Entrepreneurship W.R. Corns Building 78 S. Sandusky Street Delaware, OH 43015 Alzheimer’s Disease Research Fund in Neurology (account #302185) Center for Cognitive and Memory Disorders The Ohio State University OSU Medical Center Development 660 Ackerman Road P.O. Box 183112 Columbus, OH 443182 Or contact Jennifer Lamb at 614-336-2180 Humane Society of Delaware County 4920 St Rt e.37 East Delaware, OH 43015

The family of Joann Pickup Harvey created this Life Tributes page to make it easy to share your memories.

Family and friends mourn the passing of Joann Pickup Harvey,...

Send flowers to the Harvey family.