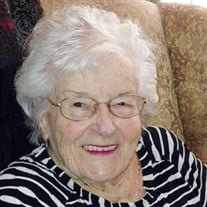 Jean Elizabeth Egbert died January 6, 2021, at Riverside Hospital in Columbus, Ohio three days shy of her 97th birthday. Jean lived a long and fruitful life and was a friend and teacher to many. She was active and sharp of mind to the end. Jean was born on January 9, 1924, in Canton, Ohio to Frances C. and Curtis D. Young, their only child. She graduated in 1942 from Canton McKinley High School and then from Heidelberg College in 1946 where she majored in political science. During World War II, she taught swimming to young men enlisted in the Navy, and following the end of the war, she married Rule D. Egbert Jr. to whom she was married for 24 years. They made their home in Tiffin, Ohio. Following her college graduation, Jean became Women’s Physical Director at the Findlay, Ohio YMCA and she also taught speech at Bowling Green State University. Jean taught social studies, government and economics for over 30 years at Columbian High School in Tiffin, Ohio, and knew nearly every senior in the school over that time. Both before and during her retirement, Jean was an inveterate traveler and a skilled card player, particularly bridge, euchre and cribbage. She was a member of the American Association of University Women, Tiffin Emblem Club, and Trinity United Church of Christ before her relocation to Columbus. Jean is survived by her loving family including Karen Egbert Kraft, Washington, D.C., Susan Egbert Young (David), Sydney, Australia, Elizabeth Crider (Mike), Gulfport, Florida, and Gwen Berlekamp (Jack), Columbus, Ohio. She was an inspiration to her eight adored grandchildren: Stacy Beckmann, Rachel Kraft, Nicole Young, Julia Kraft Goodman, Jessica Young Parker, Noah Kraft, Anna Berlekamp and Benjamin Berlekamp. She also was blessed to have seven great-grandchildren. Due to Covid and restrictions on travel, a memorial service will be held for Jean at a later date in 2021 when we can all celebrate together a life “well lived”. The family is establishing the Jean E. Egbert Memorial Scholarship with The Tiffin Community Foundation which will support students at Columbian High School seeking to enrich themselves through opportunities in leadership, government or public policy. Donations in her honor can be made at: https://www.tiffinfoundation.org/donors/.

Jean Elizabeth Egbert died January 6, 2021, at Riverside Hospital in Columbus, Ohio three days shy of her 97th birthday. Jean lived a long and fruitful life and was a friend and teacher to many. She was active and sharp of mind to the end. Jean... View Obituary & Service Information

The family of Jean Elizabeth Egbert created this Life Tributes page to make it easy to share your memories.

Send flowers to the Egbert family.