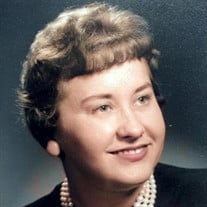 Janet (Hess) Blain, age 88, passed away peacefully on June 12, 2021, at Bickford Assisted Living & Memory Care in Worthington, Ohio. She was born May 31, 1933, in Fulton County, Rochester, Indiana, to Esther B. (Overmyer) Hess and Ellsworth Hess. She is lovingly survived by her daughter, Janet L. Blain; her son, Brian K. Blain; her granddaughter, Katherine E. Brandon, her sister, Sherry (Hess) Norris and brother-in-law, Richard Norris; and many nieces and nephews. Janet is preceded in death by her parents; and her twin Sister, Joan (Hess) Kuntz. She was a graduate of Plymouth High School, Plymouth, Indiana. Janet belonged to the YWCA and attended Indiana University branch in South Bend, Indiana. She worked as a Ward Clerk at a hospital in South Bend and also at Jane Case (Grady Memorial) Hospital in Delaware, Ohio. Janet retired from The Ohio State University Hospital after 25 years. Janet was a good person, kind and gentle, but strong when you needed her to be. In lieu of flowers, memorial donations may be given to the Heartland Hospice Memorial Fund, https://www.promedica.org.

The family of Janet Blain created this Life Tributes page to make it easy to share your memories.

Send flowers to the Blain family.