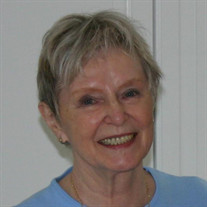 Jane Gaylor Smith, 95, formerly of Niles, Ohio, passed away on December 2, 2021 in Dublin, Ohio. Jane was born on July 27, 1926 in Manhattan, New York to the late Aleck C. and Maud (Chaffer) Gaylor, who she affectionately referred to as Al and Maudy-Pants. Jane was raised on Long Island with her older brother, Bob. She attended New York City Schools, and later The Packard Business College, earning her Advanced Secretarial degree. She worked in Manhattan as an Executive Secretary for General Cable Corporation and for the Kenyon and Eckhardt Advertising Agency. In 1943 she met the love of her life, Dudley Woodbridge Smith, on a double date to Coney Island. They were married on June 13, 1948. Following Dud’s graduation from The Ohio State University, they moved to his hometown of Niles, Ohio. There they had three boys, Dudley G., Bradley, and Brentley, and raised their family for 35 years. While in Niles, Jane worked for the law firm of MacQueen and MacQueen as a legal secretary. In 1983, they moved to Akron, Ohio, where Jane worked for the law firm of Weick, Gibson, and Lowry for five years, until her retirement in 1987. In 1988, Jane and Dud moved to Dublin, Ohio, so they could be more centrally located between their three sons. In 1995, they moved in with their youngest son, Brentley, and his family. In Dublin, Jane was a member of the Dublin Community Church. She was active in the Shamrockers of Dublin Community Church and served as secretary and board member for the Dublin Community Senior Citizens. Jane was an avid reader, especially of mystery novels, and wrote short stories and poetry in her spare time. She was an excellent cook and an avid baker, who loved to bake cookies and pies with her grandchildren. When she was young, Jane loved to knit and cross-stitch. As she got older and her hands made such work difficult, her primary pastime became beating her family members at cards. Jane loved to learn and had an impressive vocabulary. If she didn’t know something, she would look it up; she always kept reference books at the ready. She also had a witty sense of humor and could keep her family laughing. Jane cared for her husband Dud in his later years, until his passing in 2010. They were married for 62 years. Jane lived independently, with assistance from her sons, until developing mobility issues in 2018, prompting her to move to The Grand of Dublin. She is survived by her sons, Dudley Gaylor Smith of Cleves, OH, Bradley (Janet) Smith of Poland, OH and Brentley (Cynthia) Smith of Delaware, OH; grandchildren, Dudley Frey (Brianne) Smith, Courtney (Robert) Gutierrez, Brian (Meredith Taylor) Smith, Samantha (Cody) Barber, and Alexander Smith; and great-grandchildren, Dudley Thomas, Hunter Joseph and Paxton Gabriel Smith, Liliana Jane Gutierrez, and Dawn Evelyn Barber. Jane is preceded in death by her parents, Aleck and Maud Gaylor, brother, Robert Gaylor, Daughter-in-law, Laurie Smith and husband, Dudley Woodbridge Smith. A Memorial Service will be held at a later date. Jane will be interred at Union Cemetery, Niles, Ohio, alongside her husband, Dudley. In lieu of flowers, those who wish can donate to a charity of their choice in Jane’s honor.

Jane Gaylor Smith, 95, formerly of Niles, Ohio, passed away on December 2, 2021 in Dublin, Ohio. Jane was born on July 27, 1926 in Manhattan, New York to the late Aleck C. and Maud (Chaffer) Gaylor, who she affectionately referred to as Al and... View Obituary & Service Information

The family of Jane G. Smith created this Life Tributes page to make it easy to share your memories.

Jane Gaylor Smith, 95, formerly of Niles, Ohio, passed away on...

Send flowers to the Smith family.