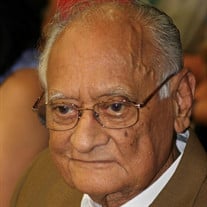 Jamshed Rai Rajput, 83, of Powell, OH passed away on November 9, 2020 in Powell, OH. He was born March 12, 1937 to Shohan Lal Rajput and Maya Devi Rajput in Bassein, Burma where his father was posted in the Indian Railways under the British Raj. After evacuating at the age of five during the Japanese invasion in 1942, his family settled in Firozpur, India where his future wife’s family also lived after the partition of India in 1947. He married Suman Arya on February 12, 1965 after meeting her again in New Delhi, India. They immigrated to the United States in 1969. He received his Bachelors of Science in Chemical Engineering from Delhi University and a Master’s Degree in Chemical Engineering from the Indian Institute of Technology. He also completed an MBA in Finance from the University of Akron. For nearly 30 years, he worked as a chemical engineer and a Capital Budgeting Manager for various corporations. After retiring from those fields, he ran his own printing business and worked as a financial advisor and tax preparer. Jamshed was a loving grandfather who dried tears by calling birds to the window, chanting, “Come on Birdy!” until his grandchildren smiled. He loved music and enjoyed singing and playing the harmonium. He also enjoyed watching old Westerns, tending his lawn, gardening, wood working and following international politics. He was highly intelligent and used his gifts to help others. He is survived by his daughter, Sumita (Mark) Lindsey and son, Ashwani (Sunita) Rajput; sisters Nirmal Capalash, Vimal Vig, and Pawan Rajput; grandchildren Sara Lindsey, Olivia (Jon) Haslop, Alyssa (Andrew) Forrest and Divya, Neha, Vikram and Priya Rajput; and one great-grandchild, Emerson Forrest. He was preceded in death by his wife, Suman Rajput and sister, Kamala Gupta. Jamshed will be honored in a private ceremony. In lieu of flowers, the family requests that you make a charitable contribution to an organization of your choice in his memory. To send online condolences, please visit www.rutherfordfuneralhomes.com

Jamshed Rai Rajput, 83, of Powell, OH passed away on November 9, 2020 in Powell, OH. He was born March 12, 1937 to Shohan Lal Rajput and Maya Devi Rajput in Bassein, Burma where his father was posted in the Indian Railways under the British... View Obituary & Service Information

The family of Jamshed R. Rajput created this Life Tributes page to make it easy to share your memories.

Jamshed Rai Rajput, 83, of Powell, OH passed away on November...

Send flowers to the Rajput family.