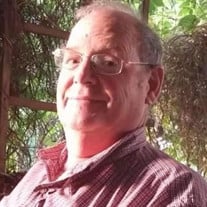 James K. Stevenson Jr, age 77 of Lawrenceburg, Indiana, died Tuesday December 14, 2021 at the Genesis Hospital in Zanesville, Ohio. He was born to the late James K and Marjorie (Rice) Stevenson on October 24, 1944 in Dayton, Ohio. James was a retired Indiana teacher for Lawrenceburg Community Schools for 45 years and was an avid American rare classical music collector and promoter. He is survived by his wife of 56 years, Ava, son James K. Stevenson III (Brittany), grandchildren Victoria (Joe) Valdes, James K Stevenson IV, Ashley, Reagan, Lauren Michael and Jacob Stevenson, a great-granddaughter Hazel Justice; his sister Nancy Jones, niece Elizabeth (Mark) French, and nephew David (Rachel) Jones. Friends may call on Friday December 17, 2021 from 6:00pm to 8:00pm at the RUTHERFORD-CORBIN FUNERAL HOME, 515 High Street, Worthington Ohio, where a funeral service will be held on Saturday December 18, 2021 at 10:00 am with Pastor Phil Conrad officiating. Burial will be at Union Cemetery. The family would like to express their appreciation to the Zanesville Fire and Medic Services, and the staff at Genesis for their loving compassion and care. Friends may contribute to the Gideons or to the charity of their choice in his memory.

The family of James K. Stevenson created this Life Tributes page to make it easy to share your memories.

Send flowers to the Stevenson family.