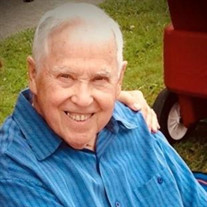 James Leroy Murphy, born 6-19-1933 in Ironton, Ohio, passed away in Columbus, Ohio on March 16th, 2021. Over the last 4 years, he made his home in Galion, Ohio, but lived all over the United States and the world. His military travels took him to many places including time served in Vietnam, Japan, Germany, Washington, California, Illinois, Indiana, Florida, Arizona, Kansas, and Ohio. He dedicated much of his life to the military starting in 1952 with the United States Marine Corps, United States Air Force, Indiana Air National Guard, United States Air Force Reserves, Department of the Army, Navy, Air Force and Defense. His dedication to helping others continued after his honorable discharge as a Major- USAF, in the Peace Corps volunteering in Bosnia-Herzegovina. While in Bosnia he made many friends and stayed in touch with them thru the rest of his life. James was a lover of music, played the trumpet and marched in the Ohio State marching band during his time in college. He ultimately graduated from Otterbein University with a major in communications. James was a devoted Christian and attended the First Presbyterian Church in Galion, Ohio. After retiring from the Air Force, he attended the Methodist Theological School in Delaware, Ohio studying to become a non-denominational Chaplain. James loved his friends, neighbors, and fellow church members. He also adored his dogs, Trixie, Bootsy, Daisy, and his two precious Beagles, Rusty and Russell. Most of all he loved his family, especially his great granddaughters. He will be forever missed. James is survived by his sister, Patricia Hunt, nephew, James Hunt, (Diane), nephew, Rob Hunt, great-niece, Laura Hunt, his daughters Linda Murphy-Seidel Charek, (Russ) and Kathleen Murphy, grandsons Mark Murphy Seidel, (Rachael) and Julian Link and his great granddaughters, Madilyn Murphy Seidel, Regan Terese Seidel and a new Seidel baby, due this Summer. He is preceded in death by his father, Thomas Leroy Murphy, mother Corabelle Murphy, sister, Betty Anne Rigeon, his uncle, Addison Hunt and the mother of his daughters, Janice Murphy. Due to the horrible toll COVID has taken on our world, nation, and family, there will be a private family burial, with Military honors on Monday, March 29th, 2021. To pay tribute to James, please consider donating to the Wounded Warriors foundation, https://www.woundedwarriorproject.org/ in his honor.

James Leroy Murphy, born 6-19-1933 in Ironton, Ohio, passed away in Columbus, Ohio on March 16th, 2021. Over the last 4 years, he made his home in Galion, Ohio, but lived all over the United States and the world. His military travels took him... View Obituary & Service Information

The family of James L. Murphy created this Life Tributes page to make it easy to share your memories.

Send flowers to the Murphy family.