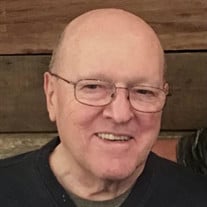 James Delano Mattern, 80, of Powell, Ohio, formerly of Parkersburg, WV, passed away on March 3, 2021 at Powell Memory Care in Powell, Ohio, following an extended battle with Alzheimer’s. Jim was born in Parkersburg, WV, on July 1, 1940 to the late Raymond and Pearl (Doak) Mattern. Jim was raised by his mother Pearl and was an exceptional athlete earning the WV State High School Wrestling Champion title in 1957 and 1958. Every match was won by a pin earning him the nickname “Mighty Mite” in the 106-pound weight class his junior and senior year. He graduated from Parkersburg High School in 1958 and attended Marshall University on a full athletic scholarship but was unable to complete his degree due to a wrestling injury his senior year. While he was at Marshall he was the Co-Captain of the wrestling team. He continued his passion for the sport by coaching Vienna Pee-Wee Wrestling and teaching his signature move, the modified fireman’s carry. Jim served in the United States Air Force from 1963-1967 at Lackland AFB and Shepard AFB in Texas and Hancock Field and Griffiss AFB in New York. He was then deployed for a year in Vietnam as the Airman in Charge of the Data Center at Tan Son Nhut AFB and earned his trip home with his DD-214. Upon return from Vietnam, Jim was employed by DuPont. He attended night school at Marietta College for seven years to earn his degree in 1974. While at DuPont he worked at the Washington Works plant in WV and corporate HQ in Wilmington, DE, where he was instrumental in company-wide data consolidation and disaster recovery in the US and Europe. Jim retired from DuPont after 27 years and, during that time, also taught Assembler computer language at Parkersburg Community College night school for 11 years. Jim continued his IT career at several companies before retiring again from Chemical Abstracts in Columbus, OH, where he and his wife Linda have lived for 27 years. He is survived by his wife of 57 years, Linda (Dickson) Mattern, and their two children Michael Mattern (Michelle) of Charleston, WV, and Jennifer Mattern Bobbitt (Chris) of Powell, OH, grandchildren Shelby Mattern Mowery (Logan), Paige Bobbitt, Matthew Bobbitt (Jessica), Andrew Bobbitt, Michelle’s daughter Sophie Morgan, and great-grandchildren Mason Mowery and Oliver Mowery. Jim is also survived by his first cousin Judy Mattern Wigal (Jim), whom he always thought of as a sister. Jim was a Christian and a member of Saint Andrew Christian Church in Dublin, OH. He served his community throughout his lifetime as a Pee Wee wrestling coach, baseball coach, and community volunteer. He will be greatly missed and remembered for his loyalty, disciplined work ethic, quiet nature, infectious smile, and dedication to his family. A graveside service at Evergreen Cemetery North in Parkersburg for the family will be followed at a later date with a Memorial Service celebrating Jim’s life. In place of flowers, please consider contributing to the Alzheimer’s Association.

The family of James Delano Mattern created this Life Tributes page to make it easy to share your memories.

Send flowers to the Mattern family.