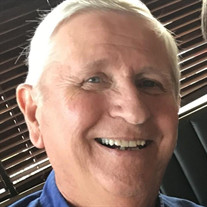 On January 7, 2022, heaven gained an angel named Jack William Parren. When my daughter Kristin heard that her Grandpa Jack had passed away she was able to sum up his life: “Grandpa was larger than life. He had such a big personality. When he entered a room you knew he was there. He was loud and funny and always quick with a joke and a smile. When he smiled it lit up a room.” Kristin was able to capture the essence of the man. These ARE the things that defined him. Our mom (Pat) and dad were married for nearly 58 years! That in and of itself is astonishing these days. Our dad was a wonderful husband. He loved our mom and told her so, often. Right up to the end of his life. He was a family man through and through. Given an opportunity to be with family, he would always choose it. My sister (Joy), brother (Jeff), and I (Jill), know how blessed we were to have our dad. He was an amazing father. But even more than a wonderful father he was an incredible grandpa! His grandchildren Kristin, Andrew, and Ryan Alfred, Abraham and Natasha Gladden, and Grace and Parker Parren were his reward for rearing the three of us. To him, they were everything. He loved nothing more than vacationing with the whole bunch of us. Hilton Head, Tennessee, and Arizona were favorites…anywhere golf was available. All 7 grandchildren have shown an interest in golf at one time or another and will remember those times on the course with grandpa. He was a fun instructor. Maybe because no matter your age, you could drive the cart if Grandpa said so…and he ALWAYS said so! He was never too busy for us. Ever. Preceding Jack in death were his mother, Anna Lillian Parren and his father, Howard William Parren. Jack is survived by his wife, children, and grandchildren as well as two sons-in-law; Michael Alfred and Levi Gladden plus many nieces and nephews. One comment from his nephew, Brian Wells, stands out for me. He shared with our mom that Uncle Jack “always had time for the kids.” Even as other adults might overlook children Uncle Jack did not. He spoke to and interacted with them as though they mattered because, to him, they did. He took an interest in those around him and that is a gift! To know Jack was to love him. He never knew a stranger and could remember names and faces of people he hadn’t seen in many, many years. He was drawn to people which is likely what made him an excellent salesman. His career spanned 54 years of selling life insurance, securities, and Medicare supplements. He was good at what he did because he believed in it. He cared about his clients and took the time to learn what they needed. He listened. Friends and acquaintances, alike, found him to be genuine and likable. As a family of faith, we feel blessed to know that our husband, father, and grandfather has left his earthly home to enjoy the reward of a life lived with Jesus at the center. He is surely telling jokes and sharing his winning smile with those who have gone before him. We love the thought of him meeting Jesus, playing cards with his buddies, golfing with friends, and enjoying the company of those family members who were waiting to welcome him into the gates of heaven. There will be no service or funeral for Jack. He did not want people to remember him in that way. Think of him as you remember him and know that that is what he would want. In lieu of flowers, consider a donation in memory of Jack by going to www.alz.org

On January 7, 2022, heaven gained an angel named Jack William Parren. When my daughter Kristin heard that her Grandpa Jack had passed away she was able to sum up his life: &#8220;Grandpa was larger than life. He had such a big personality. When... View Obituary & Service Information

The family of Jack William Parren created this Life Tributes page to make it easy to share your memories.

Send flowers to the Parren family.