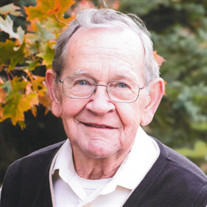 Jack Alan Price, age 91, of Powell, Ohio passed peacefully November 9, 2020. He was born February 17, 1929 in Worthington, Ohio to Mark and Alma Price. He graduated in 1948 from Hilliards High School where he participated in football and track, drama and Student Council. He was class Treasurer, Jr. Vice President and Sr. Class President. Life on the farm as a young boy included “walk plowing” with his brother. Later he had several jobs, which included paperboy, golf caddy at the University Golf Course and the Government Depot (now DCSC) where he sometimes worked with German Prisoners of War. For a short time, Jack volunteered as a Fireman for the Concord Twp. Fire Department. Allis Chalmers Farm Equipment Company was his last job before entering the Army from 1955-1957. He was a member of the 559th Anti-Aircraft Artillery Unit then was sent to the Headquarters Unit of the 101st Airborne Division. Jack met his wife, Eula (Headlee) Price at a High School Dance. They were married in August 1957. Shortly after he graduated from barber college, he worked 7 years at the Sharon Square Barber Shop in Worthington. He later transferred to the Dublin Barber Shoppe, where he would eventually become owner…He retired 36 years later. Jack treasured meeting new people and always said to keep a smile on your face and have a happy attitude. Jack was one of the founding members of the Dublin Chamber of Commerce, serving on the board of directors in ’73 and ’74. He helped organize the early Dublin 4th of July parades in which he sometimes drove his 1960 Oldsmobile convertible. In 1999, he was honored as Grand Leprechaun of the Dublin St. Patrick’s Day parade. Jack was a long-time member of the Dublin Community Church where he served as a greeter and usher and also participated in the Mr. and Mrs. Club. His hobbies included ice-skating, sledding, water skiing, fishing, hunting and regular attendance at the Dublin Rec Center. He was also known for his love of dancing and 1 armed pushups. Jack and Eula traveled Internationally and to nearly all-50 states. Jack was preceded in death by his sister, Delores (Price) Buell and brothers David and Lonnie Price. He is survived by his sister JoAnn (Price) Windle. He is also survived by his wife of 63 years, Eula (Headlee) Price, daughter, Donna (Brian) Shaw, son, Craig (Martha) Price and 5 grandchildren: Brandon and Valerie Shaw, Megan, Claire, and Rachael Price. In lieu of flowers, memorial contributions may be made to the Dublin Community Church, 81 West Bridge Street, Dublin, Ohio 43017. A special thank you to the staff and caregivers of The Ganzhorn Suites of Powell and First & Main of Lewis Center. Family will receive friends only from 1-3pm. and 6-8pm on Friday, November 13, 2020 at RUTHERFORD FUNERAL HOME AT POWELL, 450 W. Olentangy Street, Powell, Ohio 43065. MASKS ARE MANDATORY A Private Visitation and Funeral Service will be held for family at the DUBLIN COMMUNITY CHURCH followed by Interment in Dublin Cemetery. MASKS ARE MANDATORY

Jack Alan Price, age 91, of Powell, Ohio passed peacefully November 9, 2020. He was born February 17, 1929 in Worthington, Ohio to Mark and Alma Price. He graduated in 1948 from Hilliards High School where he participated in football and... View Obituary & Service Information

The family of Jack A. Price created this Life Tributes page to make it easy to share your memories.

Send flowers to the Price family.