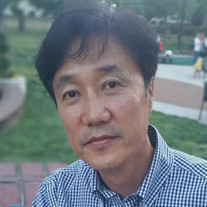 Hyoungki Park passed away on October 13th, 2020 at the age of 53 following over two years battle with brain cancer Glioblastoma. During the battle, he fought it every time and never complained. Visitation will be 2pm-4pm on October 17th, 2020 at Rutherford Funeral Home, 515 High Street, Worthington, Ohio. Funeral services will be held 1:30pm on October 18th, 2020 at St. John the Baptist Catholic Church, 720 Hamlet Street, Columbus Ohio. Hyoungki was born in Incheon South Korea to Kyoungpyo Park and Guiok Han on September 11th, 1967. He married Julie Eum on June 21st, 2003. He graduated from Yonsei University, Seoul, South Korea with Bachelor’s in Physics, Stevens Institute of Technology, New Jersey, with Master’s in Physics, University of North Carolina at Chapel Hill, Chapel Hill, North Carolina with PhD in Physics. Later, he graduated Ohio State University, Columbus Ohio with Master’s in Statistics. He worked as manager, Predictive Analytics at Spectrum Enterprise over three years. Before that, he had worked as a research scientist at Department of Physics at the Ohio State University for 11 years. Hyoungki Park is survived by wife; Julie Eum, son; Justin Park, brother; Buseob Park, sister; Soonhyeong Park, father; Kyoungkpyo Park, mother; Guiok Han. Hyoungki was a physics lover all his life and longtime fan of a professional tennis player, Roger Federer, Tar Heel College Basketball, and Seinfeld. He was also a strong supporter of the late president of South Korea, Moohyun Noh. The family of Hyoungki Park wishes to extend our sincere thanks to Dr. Euihyun Kim, Dr. Pillainayagam, Dr.Puduvali, and his caregiver, Suzie. Dear Dad, I’m sorry I didn’t spend more time with you. I’ve always looked up to you during our time together. I hope you know that. I’m so grateful for everything you’ve done for all of us. Rest in peace, we’ll meet again someday. I will forever remember you and love you. -Justin

Hyoungki Park passed away on October 13th, 2020 at the age of 53 following over two years battle with brain cancer Glioblastoma. During the battle, he fought it every time and never complained. Visitation will be 2pm-4pm on October 17th, 2020... View Obituary & Service Information

The family of Hyoungki Park created this Life Tributes page to make it easy to share your memories.

Send flowers to the Park family.