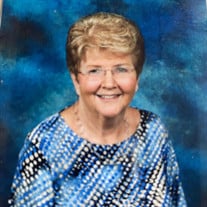 Harriet Jane (McGurer) Allen, 85, of Worthington, passed peacefully into the arms of Jesus on Thursday May 26th, surrounded by her family, at The Laurels of Worthington. Harriet is preceded in death by her loving husband Ralph E. Allen Jr (1998), infant daughter Stephanie Jo (1967) and sister-in-law Laurian (Allen) Miguel (2020). She was the eldest child of Samuel A. and Edna B. McGurer. She is survived by her four children and their families; Scott (Amy) Allen of Wooster, Ohio, Sara Greeno of Dublin, Ohio, Shelli (Donald) Forbes of Lewis Center, Ohio, and Stuart (Cindy) Allen of Powell, Ohio; grandchildren Ben (Liz) Allen of Dublin, Betsy (Seth) Buckwalter of Wooster, Nicholas (Beth Anne) Allen of Wooster, Stefanie Greeno, Michael (Lauren) Forbes of Delaware, Ryan Forbes, Carson Allen, and great-grandchildren Claire Buckwalter, Luke Allen, Olivia Buckwalter, John Allen, David Allen, Jack Buckwalter, Evelyn Mae Allen, Michael Allen and Maggie Jane Allen. She is further survived by brother-in-law, Dr. Richard Miguel of Lincolnshire, IL, and nieces Laurian (Jeff) Greenbury of Lincolnshire, IL and Lynne (Brian) Mynatt of Biggsville, IL and their families, and by sister Jeanie (Paul) McGurer Preston of Tempe, AZ as well as her children and their families, Rob (Sarah) Miley of Anthem, AZ and David (Teresa) Miley of Cincinnati, Ohio. Harriet grew up in Linworth and graduated from Dublin High School. She met Ralph in 1956 at The Ohio State University where she studied Nursing and both were students. They married in 1957 and by 1959 settled in Worthington where they raised their family. Harriet worked part-time over the years but mainly devoted her time and talents to raising her family. Camping, Square Dancing, Masonic and Shrine activities, family/children’s activities, and following her beloved Buckeyes were among her greatest joys. She was a life-long member of the United Methodist Church, in both Linworth and Worthington. The family is truly grateful to the wonderful, caring staff at The Laurels and the nursing staff from Hospice for their loving and attentive care of Harriet over the past year. Harriet’s life will be celebrated and the family will receive guests amid light food, refreshments, hearty conversation and remembrances at J. Lieu restaurant (Grand Ballroom, upstairs) at 6880 N. High St. Worthington, on Wednesday June 15th 4-7pm. A private, family interment at Dublin Cemetery will take place at a future date. Contributions may be made in Harriet’s memory to Shriner’s Children’s Hospital, Brookdale Hospice, or to a charity of the donor’s choice. RUTHERFORD-CORBIN FUNERAL HOME, 515 High Street, Worthington, Ohio, is handling arrangements.

Harriet Jane (McGurer) Allen, 85, of Worthington, passed peacefully into the arms of Jesus on Thursday May 26th, surrounded by her family, at The Laurels of Worthington. Harriet is preceded in death by her loving husband Ralph E. Allen Jr (1998),... View Obituary & Service Information

The family of Harriet J. Allen created this Life Tributes page to make it easy to share your memories.

Send flowers to the Allen family.