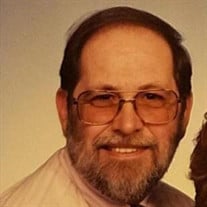 HAROLD THOMAS HABERMAN (Pete) age 79 of Delaware, OH passed away Tuesday June 15th, 2021. He was born October 14, 1941, in Columbus, Ohio. Harold was an entrepreneur who built and operated numerous businesses, one of the last being a tax preparation... View Obituary & Service Information

The family of Harold Thomas Haberman created this Life Tributes page to make it easy to share your memories.

Send flowers to the Haberman family.