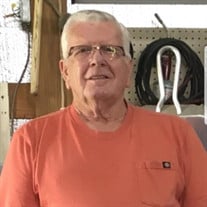 Gerald L. Anderson age 72, formerly of Candor, NY, was called home by his Lord and Savior Jesus Christ on Saturday August 28, 2021 following a brief illness. Jerry was born March 26, 1949 to the late Lester A. and Marian G. (Slate) Anderson. Jerry was a retired farmer and heavy equipment operator with NYSDOT in Owego, NY. He greatly enjoyed spending time with his family and friends, being a loving husband, father and grandfather, traveling and RVing with his wife Pat and being active in his church, where he proudly served as a trustee. He will be remembered for his love of God and family, constant willingness to help others, his teasing sense of humor, infectious laughter and warm smile. Jerry was preceded in death by his parents Lester and Marian Anderson, brother David L. Anderson, Sr. and niece Tamila Rae Creedon. Those left to cherish his memory include his loving wife of 52 years, Patricia and their three children Sherry Anderson of Nashville, TN, Michele (William) Dowdall of Marengo, OH, Jason Anderson of Franklin, TN and grandson Caleb. Jerry is also survived by his sisters Bonnie (Doug) Hornbrook of Trumansburg, NY, Mary Smith of Rover, AR and Sheari Garris of Boise, ID as well as many aunts, uncles, cousins, nieces, nephews and lifelong friends. A private memorial service will be held at a later date. In lieu of flowers, donations may be made in Jerry's memory to Harmony Baptist Church of Marengo OH.

The family of Gerald L. Anderson created this Life Tributes page to make it easy to share your memories.

Send flowers to the Anderson family.