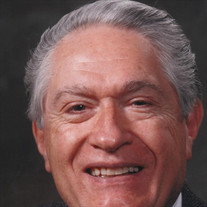 “Papou” George Patitsas George Philimon Patitsas reposed in the Lord Jesus peacefully surrounded by family and friends on Nov. 14, 2021 at the age of 86. Born January 14, 1935, in Agios Petros, Lefkada, Greece to Mauretta Katiforis and Philemon Patitsas. He is preceded in death by his beloved wife Helene, his brother Spyros, daughter-in-law Presbytera Katina, and brothers-in-law George Stamos and Anthony Makrides. George is survived by his six loving children, (Fr. Christos, M.D., Peter (Effie), Rev. Fr. Philemon (Maria), Rev. Fr. Paul (Katerina), Maria (Constantine), and Dr. Timothy - Dean of Hellenic College. He was very proud of his 19 grandchildren (his granddaughter Philothei is a tonsured nun at the Greek Orthodox Monastery of Panayia Ypseni on the island of Rhodes), 15 great grandchildren (four of which bear his name), and siblings-in-marriage Marigo Patitsas-Lemos, Theodora and John Halliday, Calliope Makrides and Georgia Stamos. He also was blessed with numerous nieces and nephews, godchildren, relatives, friends, and parishioners. George was a member of Annunciation Greek Orthodox Cathedral in Columbus for 20 years and the Annunciation Greek Orthodox Church in Akron, Ohio for 40 years. George finished Elementary School in Agios Petros, finished 7 and 8 grades in the city of Lefkada and 9-12 grades in Athens. Papou attended the private high school Ionio Scholi for several years, but graduated from the 8th High School of Athens in 1953. He arrived on the ship Nea Ellas in New York on September 19, 1953 and graduated from the University of Toledo in 1959. George had 19 patents to his name that he accumulated while working as a Chemical Engineer for four years at Owens Corning and 37 years at Goodyear. George traveled to the Holy Land and the Palestinian Territory in his life time and washed in the Jordan River. He also frequented his place of origin, Lefkada, Greece often while visiting Constantinople and Mount Athos on a few occasions. Papou George had a goal to live to witness 200 years of Greek Independence on March 25, 2021, and he achieved that goal. He most enjoyed the reading of the scripture, teaching of the Greek language, and “yogurt parties” with his grandchildren. He was a devoted and faithful husband, father, and "Papou". Friends may attend calling hours at Annunciation Greek Orthodox Cathedral, 555 N High St., in Columbus, Ohio from 6-8 PM Wed, Nov. 17, 2021 with Trisagion service at 7:30 pm. Family and friends will hold an all-night vigil around him at the church until the funeral at 11 AM Thurs. Nov. 18, 2021. Burial will follow at Resurrection Cemetery, 9571 N. High St., Lewis Center, and a Makaria will follow at Mazah Mediterranean Eatery, 1453 Grandview Avenue, Columbus. In lieu of flowers, memorial contributions can be made to the Greek Orthodox Monastery Panayia Ypseni, Lardos, Rhodes, Greece at https://www.gofundme.com/fmfzs, Annunciation Greek Orthodox Cathedral in Columbus, the Annunciation Greek Orthodox Church in Akron, Ohio or the Metropolitan Maximos Endowment Fund for Youth at the Greek Orthodox Metropolis of Pittsburgh at https://www.Pittsburgh.goarch.org/en/support.

The family of George P. Patitsas created this Life Tributes page to make it easy to share your memories.

Send flowers to the Patitsas family.