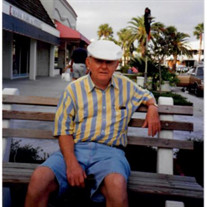 COULSON, George Raywood, age 95. Born August 18, 1925, Niagara Falls, Ontario, Canada. Passed away May 1, 2021 in Columbus, Ohio. Preceded in death by his wife Ellen Coulson, and son Christopher “Kit” Coulson (Sherrie), Ray is survived by his daughter Lynn Coulson, granddaughter Leslie Coulson Basinger (Bobby), grandson Jake Coulson, great-grandson Brennan Basinger, great-granddaughter Lilah Basinger, and many, many extended family and friends. His love of music sent him into a record store in Windsor where his future wife worked. They married on May 11, 1951 and then settled in Toronto, Ontario to start their family. He made his living as a CPA, working for American Standard and Massey Ferguson and the family then emigrated to the States, living in Rosedale Park, a suburb of Detroit, Michigan for a short time until eventually moving to Columbus, Ohio in 1965 where they made their home until he retired from United McGill in 1987 and he and his wife settled in Sarasota, Florida. They enjoyed a very happy and fulfilling retirement until his wife’s death in early 2005. He will be tremendously missed by his entire family, extended family, friends and any soul he ever met. The full embodiment of the term ‘unconditional love’ radiates from our hearts every time we think of him. His kindness, impeccable manners, graciousness, wit and intellect are unforgettable. He was a class act, right up until the end. His legacy will forever be lived out and instilled in every one of us. His arrangements are being handled by Rutherford-Corbin Funeral Home, 515 North High Street, Worthington, Ohio 43085. A private memorial service will be held in Sarasota, Florida at a later date. The family wishes to thank the staff at Bickford of Worthington and Heartland Hospice who took excellent and compassionate care of him.

The family of George "Ray" Coulson created this Life Tributes page to make it easy to share your memories.

Send flowers to the Coulson family.