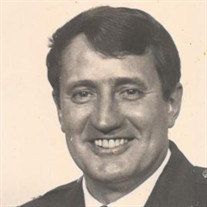 Fredrick A. Robison, Jr (Age 87) of Dublin, OH passed away on May 10, 2021. He was born March 28, 1934 in Columbus, Ohio to Fredrick A. Robison, Sr. and Bertha Robison at White Cross Hospital. A graduate of Central High School 1952, Fred served in the U.S. Navy from 1952 to 1956 as a Petty Officer 1st Class during the Korean War. He attended OSU and then joined the Columbus Division of Police in 1958. He retired as a Captain, serving 31 years. His last assignment was leading new recruits at the Columbus Police Academy for ten years. He received Criminal Law Training at Northwestern University, Michigan State University and John J. College, New York, NY. Fred was a life member of F.O.P. Capital City Lodge #9. He was a fifty year member of Westgate Lodge 623 and a 32nd Degree member of Ancient Scottish Rite Valley of Columbus. Fred was also a life member of the V.F.W. Post 10691, the American Legion Post 0800 of Ohio and a member of state and local Retired Police Officers Association. While playing fast pitch softball with the Columbus Police Division and Sullivant Friends church, they won many championships. He also coached Little League baseball and football. The enjoyment of his life was when his family would vacation in Canada fishing, hiking and eating deep fried perch. Family dinners on birthdays and holidays, golfing with friends, the annual 4th of July celebration party and the Robison/Krumm golf outing were memorable events for him. He realized his dream of sinking a hole-In-One at Hickory Grove Golf Course on September 18, 2004. Preceded in death by father Fredrick A Robison Sr., mother Bertha Shump, sister Patricia (Forest) Krumm and nephews Rick & Doug Krumm and Taylor Robison. He is survived by his wife and love of his life, Vera G. Adams Robison who he married on May 25, 1958. Sixty-two years of happy marriage. Survived by the world’s best daughter Cindy (Dan) Schneider, great son Karl (Sharon) Robison and super son Kevin (Sue) Robison. His wonderful grandchildren are Andrew (Kristen) Schneider, Dani (Andre) Druso, Jeff Robison, Amelia (Andrew) Souders, and Sam Robison. Great-grandchildren Colton and Griffin Schneider, Leo and Skylar Druso. Fred is also survived by brother Gary (Betty) Robison, sister Judy (Herb) Kennedy, brother Richard (Ginny) Robison, sister Janice (Bill) Middleton and many fantastic nieces, nephews and friends. Thanks to all the courageous police officers and supervisors who stepped forward in the early days to help Captain Robison form the SWAT Team and Officer Support Team in the Columbus Division of Police. It was Fred’s wish to be cremated and a service will be held at Rutherford’s Funeral Home, 450 Olentangy St. Powell, Ohio. Family will receive friends on Friday, May 14th, 6-8 pm. A memorial service to celebrate the life of Fredrick will be held Saturday, May 15th, 10 am, also at Rutherford’s Funeral Home. Due to Covid restrictions there will be no bereavement luncheon. In lieu of flowers, you may donate to The Columbus Police Foundation.org or mail to The Columbus Police Foundation 6714 Lakeside Cir. W, Worthington, OH 43085.

The family of Fredrick A. Robison Jr created this Life Tributes page to make it easy to share your memories.

Send flowers to the Robison family.