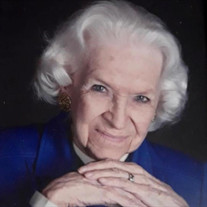 Esther Lee Ryan, 97, died suddenly and peacefully Nov 20, 2021. A lifelong Christian she was quite ready to be welcomed into her heavenly reward and rejoin her late husband, parents, family and friends. She was born Aug 10, 1924, lived through the depression with her parents in Columbus and Zanesville, Ohio. She was a 1942 graduate of Lash High School and in 1946 received her BA in Speech from The Ohio State University. She met her future husband at 1st Church of the Nazarene near the campus and were married after he returned from serving in the Army during WWII. They moved to Richmond, Indiana where he started his Engineering career. They had 2 children before moving back to their hometown of Columbus, Ohio. Several years later they adopted 5 year old Lois just before moving the family to White Plains, NY. Esther kept raising her family as her top priority, but was also quite involved in church ministries and Christian Women’s Club work. Through the years frequently she was the chair or president of various Christian endeavors. She was also a published poet, but mostly composed poems for family and friends’ special events. Esther is preceded in death by husband Robert, parents Lee and Alice Moore, and son in law, Gary Mayhew. She is survived by her children, Phillip and wife Jennifer Ryan, daughter, Lynda and younger daughter, Lois Mayhew, 2 grandsons, Jason Overly and Josh and Crystall Call, and 2 great grandsons Ethan and Bryce. Memorial Service will be held on Sunday, December 19, 2021 at 3:30pm at Linworth United Methodist Church, 7070 Bent Tree Blvd, Columbus, OH 43235. The service will also be live streamed for those not able to make the service in person. In lieu of flowers the family requests donations be made to Linworth UMC where she and Bob were active members for many years

Esther Lee Ryan, 97, died suddenly and peacefully Nov 20, 2021. A lifelong Christian she was quite ready to be welcomed into her heavenly reward and rejoin her late husband, parents, family and friends. She was born Aug 10, 1924, lived through... View Obituary & Service Information

The family of Esther Lee Ryan created this Life Tributes page to make it easy to share your memories.

Send flowers to the Ryan family.