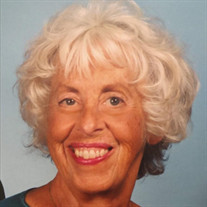 Esther Louise Bates, 94, passed away on December 1, 2021, at her home in Pinellas Park, Florida. Esther was born in London, Ohio to the late Charles and Ida Stewart. She grew up in Sidney, Ohio with her two brothers Gene and Lisle. She enjoyed spending weekends on her grandparents’ farm, milking and herding cows, and fishing with her father. The family moved to Lima, where Esther graduated from Lima Central High School in 1945. Her first secretarial job was at Westinghouse in Lima. She then went to work at Farm Bureau in Columbus, Ohio and lived with her Aunt and Uncle Jamison. In 1949, she studied Art Layout and Design at Miami University in Oxford, Ohio for a year, and returned to work at Nationwide Insurance. Esther was married to Richard Miller in 1951 and continued working until they started their family in 1954. She returned to work in 1963 with Honeywell in Columbus and spent the next 27 years working for various companies and raising her family. In 1987, Esther married Robert Bates, and in 1990, she retired from Keintz/A&A insurance company, where she was commended each year for her perfect attendance. The couple moved to Pinellas Park, Florida, where she continued her secretarial services with Oakhurst Methodist Church, First Methodist Church of Pinellas Park, and served ten years with Gideon’s International Auxiliary. The couple were members of Calvary Chapel of St. Petersburg. Esther is preceded in death by her loving husband Robert, her daughter Lisa Hagerman and her brother Gene Stewart. She is survived by her brother Lisle Stewart and wife Diane of Henderson, NV, son Paul Miller and wife Nevita of Columbus, Ohio, daughter Jana Kolikohn of Pinellas Park, FL, son Stewart (Sam) Miller of Springfield, MO, stepchildren Jim and Lori Bates of London, OH, Cynthia and Tom Berthelson of Pinellas Park, FL. Beth and Bill Bowers of Murrieta, CA, Greg and Marilyn Bates of Springfield, OH, Christopher Bates of Colorado Springs, CO, Susan Bates of Watauga, TX, grandchildren Bradley Hagerman of Sarasota, FL, Sara Finley and her husband Brent of Mansfield, OH, Lea Harper and husband Andrew of North Lawrence, OH, Shelly Hagerman and wife Shawna Davis of Columbus, OH, Gloria Chrisanty and Victoria Valentina of Columbus, OH, Several great-grandchildren and step-grandchildren. Esther will be remembered for her tireless work ethic, her generosity and love for others, her sense of humor and her quick wit. Esther will be laid to rest in Kirkwood Cemetery in London, Ohio.

Esther Louise Bates, 94, passed away on December 1, 2021, at her home in Pinellas Park, Florida. Esther was born in London, Ohio to the late Charles and Ida Stewart. She grew up in Sidney, Ohio with her two brothers Gene and Lisle. She enjoyed... View Obituary & Service Information

The family of Esther Louise Bates created this Life Tributes page to make it easy to share your memories.

Send flowers to the Bates family.