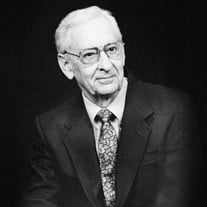 Dr. Ernest Earl Wolfle, Jr., age 87, passed away on August 27, 2020. His home was in Rockville, Maryland. Ernest was born September 18, 1932 in Columbus, Ohio to the late Ernest Earl Wolfle and Mildred Karn Wolfle. He is survived by his wife, Ann Perkins and children, daughter Wendy (Kenny) Winters of Hagerstown, MD; sons Philip (Colleen) Wolfle of Frederick, MD and Ernest Wolfle, III of Rockville, MD; grandchildren Kelsey Winters, Sarah Winters, Sherry Wolfle and Anthony Wolfle. Ernie graduated from North High School, class of 1950. He was proud to be a member of The Ohio State University Marching Band. He graduated from The Ohio State University in 1955. Ernie earned an M.A. in Music Theory in 1959 from OSU and a Doctorate in Music Education in 1969 from Indiana University. Ernie was a member of the Lutheran church. He served in the U.S. Army from January, 1952 - August, 1953 and was honorably discharged as a corporal. He told stories of Camp Polk, Louisiana for the rest of his life. Early in his career, he traveled with the Ted Weems Orchestra in the spring of 1956. He had his own band in Columbus, Music for Moderns, with lifelong friend, Jim Gary. Dick Cone and Paul Holderbaum were members of this band. He played with the Al Longstreth Orchestra, Everett Longstreth, Dave Wheeler, Fred Gump, Red Stamets and Ray Racle. He also enjoyed listening to the Famous Jazz Orchestra of Vaughn Wiester. He was director of music at Richwood High School, Richwood, Ohio, from 1956-1958 and director of bands at Woodward High School in Cincinnati, Ohio, 1959-1965. Ernie was professor of music at Montgomery College, Rockville, Maryland from 1967-1993 where he served as director of bands and associate department chairman. He was awarded Emeritus status in 1994. He treasured his friendship with a co-worker at Montgomery College, jazz composer and arranger, Bill Potts. Dr. Wolfle directed the Rockville Brass Band from 1982-1993. Dr. Wolfle served as Vice President and Treasurer of the Maryland Montgomery County Arts Council and for 25 years was President of the Maryland Chapter of the International Association of Jazz Educators. He coordinated the I.A.J.E. Eastern regional summer jazz consortium at Montgomery College from 1968-1993. In 2003, he was inducted into the Columbus Senior Musicians Hall of Fame. Ernie lived, conducted and performed in the Washington, D.C. area from 1967 to the present, performing at hotels and clubs, Glen Echo, the Kennedy Center, and in recent years, at the Cosmos Club as musical director of the Richard Bray Orchestra. A highlight was playing at the Roseland Ballroom in New York City with the Richard Bray Orchestra. Ernie was happiest playing with and directing musical groups, student and professional. He practiced his trumpet, cornet or flugelhorn daily for over 70 years and was still practicing in August of this year. He developed an interest in tennis as a young boy and participated in the sport until his death. He played doubles three days a week with his tennis friends in Gaithersburg, Maryland. There will be no public viewing or service. Ernie will be buried in Union Cemetery.

Dr. Ernest Earl Wolfle, Jr., age 87, passed away on August 27, 2020. His home was in Rockville, Maryland. Ernest was born September 18, 1932 in Columbus, Ohio to the late Ernest Earl Wolfle and Mildred Karn Wolfle. He is survived by his wife,... View Obituary & Service Information

The family of Dr. Ernest Earl Wolfle Jr created this Life Tributes page to make it easy to share your memories.

Send flowers to the Wolfle family.