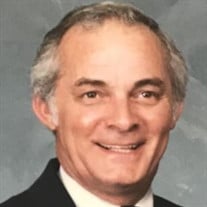 Ernest Donald “Rube” Bailey passed away peacefully at his home in Powell on January 17th, surrounded by family, including his faithful cat, Max. Rube is survived by his wife of 46 years, Suzanne; daughter Leigh Davis (Bob); son Brian Bailey (Karen); daughter Rachel Cesta (Tom); daughter Nadine Pennypacker (Kurt); daughter Natalie Stepanov (Zoran); his brother George “Pete” Bailey; eleven grandchildren: Christopher (Delanee) and Kevin Bailey; Brennan, Marley, Ryleigh, and Shane Cesta; Arlo and Otis Pennypacker; and Vesna, Vid, and Vuk Stepanov; one great-granddaughter, Brielle Bailey; and many nieces, nephews, cousins, and friends. Rube was born on May 15, 1932 in Speidel, Ohio to Cora (McBurney) and Ernest David Bailey. He was the youngest of their eight children and grew up on the family’s dairy farm. Rube graduated from Barnesville High School in 1950 and went to work for Ohio Bell, from which he retired in 1992 after 39 years, having worked his way up from Lineman to Personnel and Labor Relations Director in Columbus. As a restless retiree, he assisted with his son’s landscaping business and served as a maintenance consultant for other companies. Eventually, he was content enjoying his house and boats on Apple Valley Lake and helping his neighbors and friends. In 2018, he and Suzanne moved to Powell. Rube was stationed in Germany while serving for the United States Army in the early 1950s. He was a member of Friendship Lodge #89 Free and Accepted Masons, Aladdin Shrine, Ancient Accepted Scottish Rite, and Maple Grove United Methodist Church. Rube loved cars and owned 59 of them in his lifetime. A brilliant handyman, Rube could repair almost any machine or electronic and was a capable plumber and electrician. Rube was known for his vast collection of tools, a love of chocolate, and his preference for hankies. A descendent of Quakers, Rube was a man of integrity and patience, and always the first to help. Rube was loved by many, especially his large extended family, who will always remember his silly jokes, funny songs, and big heart. In lieu of flowers, please consider making a donation to Shriners Hospitals for Children, the Mid-Ohio Foodbank, or the Foundation for End of Life Care.

The family of Ernest "Rube" Bailey created this Life Tributes page to make it easy to share your memories.

Ernest Donald “Rube” Bailey passed away peacefully at his home...

Send flowers to the Bailey family.