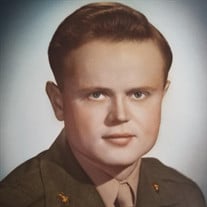 Elton Lee Defenbaugh ("Archie") Reunited with his Lord and Savior, Jesus Christ on Friday, February 11, 2022 in Columbus, Ohio at the golden age of 90. Elton is preceded in death by his wife, Wanda Lee (Shields) Defenbaugh, brother and sister-in-law Ray and MaryAnn Defenbaugh, and parents Helen and Grover Defenbaugh, Niece Susan Taylor. Born September 13, 1931 in Columbus, Ohio, Elton was a Sergeant in the United States Marine Corp. His early jobs included working at the Sohio Station at Morse and High. Elton grew up in Clintonville and is a proud Polar Bear graduate from Columbus North High School. Survived by sisters, Joy (Gary Gardner) Grove City, Ohio, Sue (Tom Dickson), Colorado, sons, Jerry (Joan), Allan (Kimberly), Grandchildren Caleb Joseph, Jacob Allan (Eileen), Casey Ann. Also survived by great grandchildren Ellianna Renee, Nathanial Tremmel and Quentin Josiah, Zoey Ann, Raya Marie. All of Columbus Ohio. Nieces and Nephews Jason and Yulia Defenbaugh, Columbus, Kristy (Doug Reed) Grove City, Heidi (Travis Burbridge) Grove City, Neil and Melissa Gardner, Dean and Erica Gardner, Jodi Gardner, Bonnie (Nick Smith) Columbus, Deanna (Joe Marshall) Grove City, Connie Johnson Columbus, Linda (Dave VanPelt) Columbus. Great Nieces and Nephews Caroline (Wes Shults), Erin, Monica, Danielle, Clifford, Annsley, Graham, Brent, Noah, Ruby. Elton retired from Battelle Memorial Institute. He was an electronics technician and worked in the Electronic Lab. Part of his career at Battelle was maintaining their security system. He loved anything to do with engines, steam engines, motors and electronics. We called him Elton, Archie, Uncle Elton, Dad, Grandpa and Gramps. He knew how to take things apart and put them back together. If he didn’t know how to do something, he learned it on his own. Some say he was a collector. Others would disagree. If you needed help, he was there with every tool needed for the job. Steam Engine shows were a favorite event to do with his brother Ray. Elton met the love of his life way back in the early 50’s. His best friend, Bob, had a girlfriend with a younger sister named Wanda Lee. He and Wanda were married over 60 years. Since the day Wanda passed, Elton has wanted to be with her again. God bless his sweet soul. May he rest in peace. During the most recent 11 months, Elton lived at Glenwood Memory Care in Dublin, Ohio. He was loved by many and they have wonderful memories to share of Elton singing with them, doing activities and crafts, but most of all he was safe, well fed and care for. We appreciate the quality of care he received. Prior to moving to Glenwood, Allan and Jerry took care of Elton as his dementia progressed. He had the love of family and dear friends who all cared about his well being. Joyce and Joe Schneider, Loretta Platt, neighbors Jesse and Alana Smith and many dear friends cared about Elton. Many have passed on through the years and it gives us all great joy to know he is reunited with so many loved ones and friends from his past.

Elton Lee Defenbaugh ("Archie") Reunited with his Lord and Savior, Jesus Christ on Friday, February 11, 2022 in Columbus, Ohio at the golden age of 90. Elton is preceded in death by his wife, Wanda Lee (Shields) Defenbaugh, brother and sister-in-law... View Obituary & Service Information

The family of Elton Defenbaugh created this Life Tributes page to make it easy to share your memories.

Elton Lee Defenbaugh (&quot;Archie&quot;) Reunited with his Lord and Savior,...

Send flowers to the Defenbaugh family.