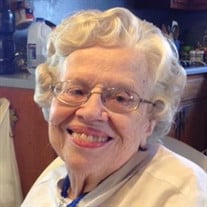 ELIZABETH A. (ROMIG) VAUGHN, age 87, of Columbus, Ohio passed to eternal life on August 25, 2020. Elizabeth is lovingly remembered by her children Kurt (Tami) Vaughn, Cheryl (Paul) Whatley, Joel (Beth) Vaughn, James Vaughn, and Mary (John) Gween, grandchildren Kurt Nicholas Vaughn, Stephen, Michael (Jessica), and Carrie Whatley, Rebecca (Konner) Barr, Alyssa and Christopher Gween, great-grandchildren Emilee Jo Vaughn and Thomas and David Whatley, her sister and brother-in-law Sara and John Hunter, and many nieces and nephews. She is preceded in death by her husband, Richard, of nearly 61 years, her parents Truman and Ruth (Hallowell) Romig, and her brother John Romig. Elizabeth was born November 6, 1932 on a farm just west of Carey, Ohio. She graduated as valedictorian from Carey High School in 1950 and went on to earn a degree in Medical Technology from Capital University in 1954. On December 19 of that same year, she married Richard Vaughn of Defiance, Ohio and they settled in Columbus, Ohio where they raised their family. She was a long-time member of Ascension Lutheran Church in Columbus and, through the years, served with Capital University Women’s Alumnae Chapter (CUAC), the Women’s Auxiliary of the Franklin County Ohio Society of Professional Engineers, and the COSI Women’s Association. She was also a member of The McCoy Pottery Collector’s Society. Her hobby of collecting these Ohio-made potteries expanded into other antiques and collectibles and eventually led to the creation of an antique business which she owned and operated for many years. Funeral Services will be held at 10am on Monday, August 31st at Ascension Lutheran Church, 1479 Morse Rd., Columbus, OH. Family will receive friends Sunday, August 30th from 2 – 5 pm, at RUTHERFORD-CORBIN FUNERAL HOME, 515 High St., Worthington, OH. 43085 and also at the church one hour prior to the service. Burial will be in Union Cemetery in Columbus. Memorial donations may be sent to Ascension Lutheran Church or Capital University.

The family of Elizabeth A. Vaughn created this Life Tributes page to make it easy to share your memories.

Send flowers to the Vaughn family.