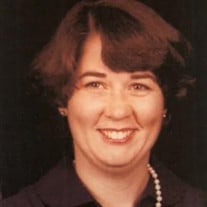 Elizabeth Jean Mayo MacLaughlin was born on October 29, 1944 in Tallahassee, Florida and passed away on October 27, 2020 at St. Ann&#8217;s Hospital, Westerville, Ohio. She is survived by her husband of 52 years, Lewis H. MacLaughlin III, and... View Obituary & Service Information

The family of Elizabeth Jean MacLaughlin created this Life Tributes page to make it easy to share your memories.

Send flowers to the MacLaughlin family.