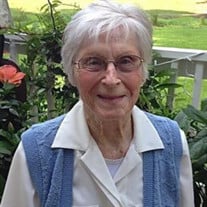 Elberta Catherine Schirtzinger Cullinan, 99, of Columbus, Ohio died 9/24/2020. She was born 2/5/1921 to Herbert and Gladys Schirtzinger of Columbus, the oldest of 7 children; Elberta, Herbert, Richard, Eileen (Biddy), Cecil, Oma (Dolly) and David. She married John Joseph Cullinan on 4/4/1944 and supported him in his every endeavor, including co-founding Vacuform Plastics. They raised six children together and, when her youngest boys were preteens, she took up golf with them, and from then on spent much of her time on the golf course, joining John in his favorite sport. They were long-time members of St. Andrew Catholic Church in Upper Arlington and appreciated Fr. Schulz, who could complete a Mass during the halftime of an OSU game. They lived for many years in Sarasota, Florida and, after John’s death, Bert and Susie moved to Charleston, S.C. to live with son Jack. She was preceded in death by John Cullinan and daughter Karen Susan Cullinan. She is survived by sons Michael (Katherine), John (Rebecca), David (Catherine), James (Olena), and Robert (Jill), 8 grandchildren, and 6 great-grandchildren, her sister Oma (Dolly), her sister-in-law Jeannie Brown, and may nieces and nephews. The family is grateful for the care shown to their mother by the staff of Whetstone Care Center, and to Father Lumpe for giving her the sacraments in her last days. There will be no service at this time.

The family of Elberta Catherine Cullinan created this Life Tributes page to make it easy to share your memories.

Send flowers to the Cullinan family.