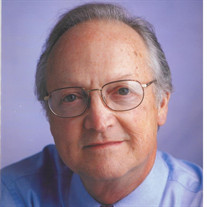 Dr. Dan Ross McFarland of Dublin, Ohio passed away peacefully on Friday, January 21, 2022 in his home surrounded by family. Born February 7, 1937 in Chillicothe, Ohio to Ralph L. and Veda A. McFarland. He is preceded in death by his parents, his mother-in-law Mary Janet Ritterspach, father-in-law Thomas Edward Ritterspach, and sister-in-law Barbara Jane McKenzie. Dan is survived by his wife of 59 years, Phyllis Ann McFarland the love of his life, his four children Dan McFarland, Amy McFarland, Jody McFarland and Amanda Lackey (Logan), ten grandchildren Katlynn McFarland, Kristen McFarland, Daniel McFarland, Aedin Lackey, Logan Lackey, Leiden Lackey, Keelin Lackey, Rowyn Lackey, Torrin Lackey, Maren Lackey, brother Orval William “Bill” McFarland (Sue), sister Judy Flee (Marlyn), brother-in-law William “Bill” Ritterspach (Diane), many nieces and nephews, their spouses, and grandnieces and grandnephews. Dan was a graduate of Ohio Northern University in 1959 and an active member of Sigma Phi Epsilon Fraternity. In 1963 he graduated from The Ohio State University College of Medicine where he was a member of the Phi Chi Medical Fraternity. Dan continued his education specializing in Radiology followed by service in the United Sates Air Force in San Antonio Texas. After proudly serving, he relocated to Worthington, Ohio where he enjoyed a lengthy career with Riverside Methodist Hospital and a private practice, Columbus Mammography. Professionally Dan was a member of OH Round Table of Medical Arts (ROMA). His hobbies and interests were vast. As an avid cyclist, Dan participated many years in TOSRV and inspired his children to do the same. He loved to play golf with his wife and friends at Brookside Golf and Country Club and Muirfield Village Golf Club where he was a member of The Memorial Club and volunteered for many Memorial Tournaments. As a history enthusiast, he was very interested in Native American art and artifacts, and American antiques and political items. As an amateur photographer, his family and the Arizona desert were his favorite subjects. Dan was a life-long Ohio State football and basketball fan and supporter of the Buckeye Club and Presidents Club. He was so excited with the Buckeyes’ recent victory at the Rose Bowl. Dan especially enjoyed participating in the GYRO Club of Columbus, a fraternity of friendship. Dan was a man of great compassion and character. He helped so many people in so many ways over the years. He will be greatly missed by his cherished friends and family. There will be a celebration of Dan’s life later this year. We are very grateful for the loving care Dan received from the Ohio Health Hospice team and Visiting Angels. Please, Do Not Send Flowers.

Dr. Dan Ross McFarland of Dublin, Ohio passed away peacefully on Friday, January 21, 2022 in his home surrounded by family. Born February 7, 1937 in Chillicothe, Ohio to Ralph L. and Veda A. McFarland. He is preceded in death by his parents,... View Obituary & Service Information

The family of Dr. Dan Ross McFarland created this Life Tributes page to make it easy to share your memories.

Send flowers to the McFarland family.