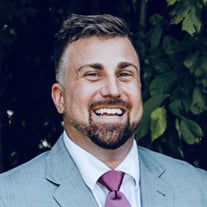 Douglas Albert Blake 34, of Columbus, Ohio, passed away at home on April 2, 2021. Doug was born January 5, 1987 in Columbus, Ohio, a son of Orval Blake and Laura and William Woods. He was a 2005 graduate of Worthington Kilbourne High School and then served in the United States Army. Doug’s life changed with the birth of his children. The boys were his world. Doug’s heart was huge, and he had the ability to reach people in a deep and positive way. He was known by many as “Dougifresh”. His smile and laugh are one that will never be forgotten. Doug is survived by his children, Jackson Ares Blake and Mason Patrick Blake of Columbus along with their mother, Mary Alexis Blake; and his parents. Also surviving are two brothers, Alex (Amber) Blake of Etna and their children, Alana, Avery, Bennett, and Macie; William Woods, Jr. of Columbus; two sisters, Cara Woods and her son Caden of Thornville, Lacey Woods of Columbus; Grandparents, Charles and Mary Ann Lang; Grandmother, Mary Fleming. Doug is also survived by numerous aunts, uncles, and cousins. Doug was preceded in death by his Grandparents, Orval Sr. and Elena Blake; Grandfather, Patrick Fleming; Father-in-Law, Ken Foster and Mother-in-Law, Patti Fleming; Aunt, Judi Blake and Aunt and Godmother, Teresa Lang. Mass of Christian burial will be celebrated Saturday, April 10, 2021 at 10:00 am at St. Peter Roman Catholic Church, 6899 Smokey Row Road, Columbus, Ohio 43235 with interment and graveside services in Resurrection Cemetery, 9571 North High Street, Lewis Center, Ohio 43035. Family and friends may visit Friday, April 9, 2021 at Rutherford Funeral Home, 450 West Olentangy Street, Powell, Ohio 43065 from 1-3 pm and 5-7:15 pm with A Time of Sharing from 7:15 to 7:45 pm and recitation of the rosary immediately following. In lieu of flowers donations for Jackson and Mason may be made by contacting Orval Blake, Jr. at [email protected]

Douglas Albert Blake 34, of Columbus, Ohio, passed away at home on April 2, 2021. Doug was born January 5, 1987 in Columbus, Ohio, a son of Orval Blake and Laura and William Woods. He was a 2005 graduate of Worthington Kilbourne High School... View Obituary & Service Information

The family of Douglas Albert Blake created this Life Tributes page to make it easy to share your memories.

Douglas Albert Blake 34, of Columbus, Ohio, passed away at home...

Send flowers to the Blake family.