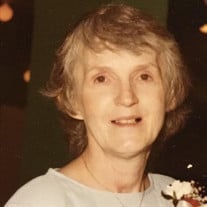 Dorothy “Dot” Mae Hoelker nee Ziegler, 88, of Orient, Ohio, died Jan. 31 of natural causes at a family home in the comfort and care of her children. Dorothy was born in Newport, Kentucky to Stephen and Bertha Ziegler. She had one brother, Richard. She graduated high school from Our Lady of Providence Academy in Newport. She attended college at both St. Thomas More and Xavier University. She married John “Jack” W. Hoelker in 1954 at St. Stephen Church in Newport. Dorothy resided in Grove City, Ohio, and then Orient, for more than five decades, where she and John raised eight children. She was a member of Holy Family Catholic Church in Columbus, Ohio. A lifelong Catholic and advocate for the pro-life movement, Dorothy volunteered and held leadership positions with Right-to-Life and, most notably, Birthright of Columbus. She helped found Birthright of Columbus in 1972. This organization offers material and emotional support to new mothers. She supported and counseled women for decades in support of the pro-life movement. In 2014, Dorothy was presented with a Lifetime Achievement award by Birthright in recognition of her efforts. Dorothy worked at Mt. Carmel Hospital for more than 35 years in the medical records department. Dorothy’s joy in life was spending time with children, grandchildren and great-grandchildren. Dorothy loved animals, cats in particular, and had many throughout her life. George, an orange tabby, gave her comfort in her final days. She is survived by her children: Mary Lynn Snook (Bill) of Lancaster, Ohio; John (Polly) of Columbus, Ohio; Steve of Orient, Ohio; Joe (Paula) of Perth, Australia; Edmund “Buzz” of Lafayette, Louisiana; Helen of Denver, Colorado; Bertie Janita (Bernie) of Somerset, Ohio; and Florentine (Margie) of Lakewood, Ohio. Grandchildren: Elizabeth, Paula, Katherine, Joe, Stephanie, Matt, Nate, Jessica, Jennifer, Steve Jr., Dezreena, Rhett, Shelly, Kassie, Luke, Stacie, Bernie Jr., Richard, Brittany, MaryKate, Nick, Ben, Max, Theo and Owen; John, Jimmy, Claire, and their father, Jim. She is survived by 22 great-grandchildren. Dorothy was preceded in death by her husband, John (1993), parents, Stephen and Bertha, brother, Richard, and his wife, Lorena; daughter-in-law, Natalie. A funeral Mass will be held at 11:30 a.m. Saturday Feb. 12 at Holy Family Church, 584 W. Broad St.,Columbus, Ohio. A reception will be held prior at 10:30 a.m. and a repast will follow Mass at the church hall. In lieu of flowers, donations may be made to Birthright https://birthright.org/columbusohmain/ or Fairhope Hospice https://fairhopehospice.org/.

Dorothy &#8220;Dot&#8221; Mae Hoelker nee Ziegler, 88, of Orient, Ohio, died Jan. 31 of natural causes at a family home in the comfort and care of her children. Dorothy was born in Newport, Kentucky to Stephen and Bertha Ziegler. She had one... View Obituary & Service Information

The family of Dorothy Hoelker created this Life Tributes page to make it easy to share your memories.

Send flowers to the Hoelker family.