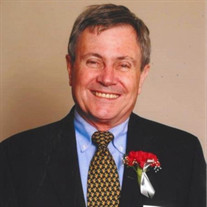 Donald James Eckert, age 71 of Dublin, passed away on January 6, 2021 at Kemper House in Worthington, Ohio where he had resided for most of 2020. He "fought the good fight" against Alzheimer's Disease and Cystic Fibrosis. He was born on August 30, 1949 in Akron, Ohio and was the son of Dr. Joseph J. and Mary "Kay" Bouton Eckert. Both of his parents worked in the medical field; their career choices may have contributed to Don's interest in science. A proud member of the Akron Firestone HS Class of '67 he excelled in math and chemistry. A National Merit Scholarship finalist, he was in the top 1% of high school students nationwide. He enjoyed creating science fiction stories, participating in track and in the Latin Club. At that time, he was a member of Westminister Presbyterian Church in Akron. He earned his B.S. in Psychology at Michigan State University and was active in the Tau Delta Phi social fraternity. He then pursued a Master's Degree in Psychology at the Ohio State University, partially funded by a National Institute of Health grant. Taking time to earn money for future graduate school, he worked at Ace Rubber in Akron, providing him an opportunity for reflection regarding his future. His love of the outdoors, coupled with his chemistry background led him to earn a Ph.D in Agronomy at OSU. He remained there for about 35 years first working with the Cooperative Extension Service throughout most of Ohio's 88 counties and progressing to teaching, research and administration. Initial focus was on soil fertility and no-till farming. He loved the interactions with students, advising the Agronomy Club and developing some solid relationships. His sense of humor served him well throughout his work life; work took him to most of the continental U.S., Europe, Africa and Australia. He was the Associate Chairman of the Agronomy Department and when it was absorbed into the School of Natural Resources, he served as their Assistant Director until his retirement. He treasured his friends from graduate school: Jim Adams, Edd Gatliff and Marty Schmidt He and Jim loved fishing and Frisch's Big Boy outings for many years and often took in baseball games. He cherished a life long friendship with Joel Kent of Worthington, bonding in the 4th grade in Akron. Fishing, fly tying, trains, travel, and gardening occupied his retirement. Many happy times were spent with dear friends Wendy and Tony Manfredi of Lakewood, especially at Cleveland Indians baseball games. Particularly enjoyable was the time spent at the Ohio Wildlife Center nearby. His volunteer duties included caring for the raptors, helping the children at day camp and outreach with animal ambassadors. At Halloween events, he dressed up as a fox, which all ages enjoyed! He was predeceased by his parents and a sister-in-law, Sharon Nall of Mayfield Hts, Ohio. He leaves behind his loving wife of 42 years, Holly Shumway Eckert, his brother Rick Eckert (wife Michelle) of Colorado Springs, CO, his brother Bill of Louisville, KY and special cousins Judy Marshall of FL and Chris and Dan Hurley of Gahanna, Ohio. His many rescue pets were much loved and will meet him at the Rainbow Bridge. A Celebration of Life will be held at a later date with inurnment at the Rose Hill Cemetery in Akron, Ohio. If desired, donations may be made to the Ohio Wildlife Center, 6131 Cook Road, Powell Ohio 43065 www.ohiowildlifecenter.org or the Alzheimer's Association, 1379 Dublin Rd, Columbus, OH 43215. Holly extends her appreciation to the caregivers at Kemper House of Worthington who enhanced his last year of life.

Donald James Eckert, age 71 of Dublin, passed away on January 6, 2021 at Kemper House in Worthington, Ohio where he had resided for most of 2020. He "fought the good fight" against Alzheimer's Disease and Cystic Fibrosis. He was... View Obituary & Service Information

The family of Donald Eckert created this Life Tributes page to make it easy to share your memories.

Donald James Eckert, age 71 of Dublin, passed away on January...

Send flowers to the Eckert family.