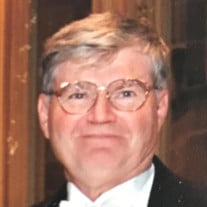 Donald David Carroll Sr., age 83, passed away peacefully, Tuesday, November 10, 2020, to rejoin his wife of 61 years, Patty, who passed away in late December. He met his mate for life, Patty in 1st grade. He proudly told the story of carrying her books to school each day walking down Wilson Avenue. Don, affectionately known as Donzie, was always the life of the party, with Hershey bar in cargo pocket right, flashlight in cargo pocket left, hankie and pen and paper in breast pocket, he had so many pockets to fill. They were always filled with love should any occasion arise. Donny was a graduate of Holy Rosary High School, Class of 1955 where he served as their very first student council president, was a member of the National Honor Society, and was a decorated state finalist swimmer. He attended St. Charles Borromeo Seminary College, (briefly, until as he would tell it, his future wife Patty collected him), went on to attend Ohio University, and graduated from THE Ohio State University. Don spent several years as a Reservist in the Ohio National Guard. Spanning the many years of raising 6 children with Patty in Columbus, Scotch Plains, New Jersey and back to Dublin, Ohio. He served as Cub Scout Master, Leader with the Indian Guides , baseball coach, and was a member of the St. Timothy Finance Committee. Don started his career with Rockwell International in Columbus, relocated his family to Scotch Plains New Jersey where he was a Purchasing agent for Westinghouse, finally ending his career back in Columbus, as co-owner and operator of his father’s family business John A. “Judy” Carroll Scrap Metal on Goodale Avenue. Don was on the leading edge of the ‘green movement’ in recycling, long before it was trendy. In Don’s eyes, even the empty milk-jug had a second act, collecting rainwater for all his outdoor plants. Some of the best memories of families and friends were spent during summers on Emerald Isle, NC, where he would be found digging the most impressive sand crater for the kids and grandkids to play in. Don would be adorned in his signature beach attire, half shirt and floppy hat. He enjoyed his evening happy hours with a Tanqueray and Tonic while supervising the dinner preparations, Patty whipping up his favorite linguini and white clam sauce, or blue soft-shell crabs on the deck. Don loved the evening sunsets on the deck in his rocking chair, looking out over the surf, proudly watching his Irish flag wave in the ocean breeze. Donny was preceded in death by his wife, Patty of 61 years and his infant daughter, Kimberly; parents John and Frances (Schoppelrei) Carroll, sisters and brothers Eileen (McGreevy), Jane (Reese), John, Paul, and Thomas. Survived by his sister Ann (Hall); children, Katherine (Steve) Marsh, Susan (Joel) Solinger, Mary Beth (Andy) Vejnoska, David (Nicole), Tim (Ann), and Erin (Chad) Stanley; 26 grandchildren; 9 great-grandchildren; many nieces, nephews, and very dear friends. Friends may call Thursday, November 19, 2020 from 5 p.m. to 7 p.m. at RUTHERFORD-CORBIN FUNERAL HOME, 515 High St., Worthington. Mass of Christian Burial 10:00 a.m. Friday, November 20, 2020 at St. Timothy Catholic Church, 1088 Thomas Lane, Columbus, OH 43220. Father David Poliafico, Celebrant. Private family burial. The family would like to thank the wonderfully compassionate staff at Dublin Assisted Living and Memory Support, Capital City Hospice, all of whom provided our father with such loving care. In lieu of flowers, contributions, if desired, may be made to Capital City Hospice, 2800 Corporate Exchange Drive #170, Columbus, OH 43231.

Donald David Carroll Sr., age 83, passed away peacefully, Tuesday, November 10, 2020, to rejoin his wife of 61 years, Patty, who passed away in late December. He met his mate for life, Patty in 1st grade. He proudly told the story of carrying... View Obituary & Service Information

The family of Donald David Carroll Sr. created this Life Tributes page to make it easy to share your memories.

Send flowers to the Carroll family.