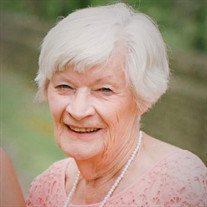 Diana Lee Hunter of Worthington, beloved mother, grandmother, great-grandmother, and friend passed away Friday, March 5. Diana was born December 28, 1937 in Geneva, Ohio to George and Beatrice Woodward. She is preceded in death by her parents, several siblings, and her husband, Roger, with whom she shared a blessed life for 59 years. Diana is survived by her children, Steve (Pam) Hunter of Florida, Kelly (Scott) Hunter-Rice of Lewis Center, and Doug (Kitra) Hunter of Lewis Center; her grandchildren Erin Hunter of Columbus and Couri Hunter of South Carolina, Beth (Josh) Branham of Westerville, Megan (Matt) Teismann of Westerville, Cody (Kym) Rice of Alaska, Luke (Victoria) Rice of Texas, Max (Ali) Hunter of Dublin and Madison (Luke) Roth of Westerville; great grandchildren Trevor, Jackson, Ruby, Lilly, Hazel and Jameson; sister Sally Robinson of Canada. An avid golfer, Diana was a longtime member at the Golf Club at Little Turtle and she often made the leaderboard in club and local tournaments. If you played 18 holes with Diana, she would likely beat you. She loved ABBA and Queen, a good dark beer, and the challenge of an “expert” crossword puzzle. Wintering in Amelia Island brought her great joy as did the rowdy reunion gatherings at Geneva-on-the-Lake with her large family. She was a long-suffering Browns fan, and rarely missed a grandkid’s game, recital or activity. She adored her dog, Frank, and spoiled him rotten. If you were lucky enough to be family - or a friend she treated as family - your world was made better by Diana’s kindness, her strength, her selflessness, and her love. For the past 5 years, she has missed her best friend terribly. It comforts those of us left behind to know that Diana and Roger are reunited, sharing a hot dog and beer at the turn, and driving the ball straight down the middle of the fairway. Honoring her request, there will be no memorial service. Those inclined are invited to donate in her name to the American Cancer Society or The American Heart Association.

Diana Lee Hunter of Worthington, beloved mother, grandmother, great-grandmother, and friend passed away Friday, March 5. Diana was born December 28, 1937 in Geneva, Ohio to George and Beatrice Woodward. She is preceded in death by her parents,... View Obituary & Service Information

The family of Diana Lee Hunter created this Life Tributes page to make it easy to share your memories.

Send flowers to the Hunter family.