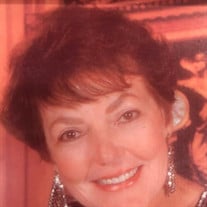 DeeLight “Dee” Grover of Dublin, formerly a long-time resident of Worthington Hills, passed away on May 22, 2021 at Mayfair Village Nursing Care Center. She was born in Chicago, Illinois on May 29, 1935 to the late Oscar and Jeanette (Weis) Grebe. She had been a resident of the Columbus area since 1972. She attended Western Illinois University where she was a member of the Alpha Sigma Tau sorority. There she met her future husband, James R. Grover, and they were married in 1957. She is survived by her husband, James; daughter, Lisa (Mike) Samogala of Deltona, Florida; sons, Steven (Renee) Grover and Keith (Kristi) Grover, both of Lewis Center, Ohio; grandchildren, Julie and Nickolas Samogala, Lauren (Washburn), Danny, Gavin, and Luke Grover, and Tyler and Allison Grover, as well as great-granddaughters Kennedy and Grace Washburn. Also survived by brother, Les (Sandy) Grebe; nephew, Scott (Kris) Grebe and niece Kelly (Brian) Audette, all living in the Minneapolis, MN area. She was an art major in college and continued to enjoy oil and watercolor painting in her later years. She was crowned Ms. Quincy, Illinois in 1954 and would be a contestant in that years Ms. Illinois pageant. For her talent, she would play the piano, and continued to play her favorite piece, “Military Polonaise” into the 1970’s. As a vari-typist/layout artist, she held jobs in Chicago and Purdue University. For a time, she was a substitute secretary for the Worthington School System and retired in 2000 as Administrative Assistant to the Executive Director of Kappa Kappa Gamma Fraternity at their Headquarters in Columbus. Her favorite things in life included spending time with her family (especially at their cottage on South Bass Island), Buckeye football games, scuba diving in the Caribbean, photography, traveling and visiting friends, creating picture albums for her family, and her dogs Coco and Abby. She and her husband were members of the Put-in-Bay Yacht Club, the Crews Nest and founding members of the Lake Erie Islands Historical Society. Family will receive friends at RUTHERFORD-CORBIN FUNERAL HOME, 515 High St., Worthington, on Wednesday, June 2, 3:30 – 5:30 pm with a service to follow at 5:30 pm. In lieu of flowers, donations may be made in her memory to the Capital Area Humane Society, 3015 Scioto Darby Executive Ct., Hilliard, OH, 43026.

DeeLight &#8220;Dee&#8221; Grover of Dublin, formerly a long-time resident of Worthington Hills, passed away on May 22, 2021 at Mayfair Village Nursing Care Center. She was born in Chicago, Illinois on May 29, 1935 to the late Oscar and Jeanette... View Obituary & Service Information

The family of DeeLight "Dee" Grover created this Life Tributes page to make it easy to share your memories.

Send flowers to the Grover family.