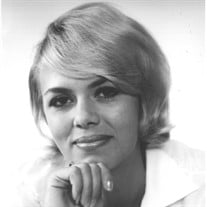 Deborah Dryden Turoff, 77, went to be with her heavenly family on Wednesday evening, May 18, 2022, following a battle with dementia. Debby was surrounded by her family and cherished caregivers at Kemper House Worthington. Debby was born on July 22, 1944, in Springfield, Massachusetts to James and Gloria Dryden. Debby grew up in Dayton, Ohio and graduated from Colonel White High School in 1962. She graduated from The Ohio State University in 1966 with a degree in Psychology. It was there that she met the love of her life, her late husband Stuart James Turoff, and they were married on November 19, 1966. Debby had an entrepreneurial spirit and a long and rewarding professional career. Initially, she served as a social worker along with teaching sewing and cooking classes. Following the premature passing of her husband in 1983, Debby moved into the printing business, where she served as a customer service representative at R. R. Donnelley & Sons in Willard, Ohio. While in Willard, Debby had the honor of serving as the first woman president of the Willard City Council. She was named the Mansfield News Journal Woman of the Year for 1980. Debby later moved to the Columbus, Ohio area where she worked as a customer service representative for Lithokraft II, and later as a tax consultant at H&R Block. Full of adventure and a love of the outdoors in any season, Debby could frequently be seen running, biking, swimming or snow skiing. She ran her first marathon at the age of 50, and later qualified for and completed the Boston Marathon. She loved riding in the Great Ohio Bicycle Adventure, touring the state of Ohio every year with family, friends and new companions. She started the Willard Ski Club and skied everywhere from New York to Austria. Her favorite vacation spot was her beloved Long Beach Island, NJ where she spent weeks every summer her entire life. Debby was a member of Indianola Presbyterian Church in Columbus, where she served as a Deacon for many years. Debby is survived by her sister, Deirdre (Dryden) Humphrey, her three children, Beth (Turoff) McCreary, Tamara (Turoff) Keough and James Turoff, each of their spouses, seven grandchildren and an extended family whom she loved and cherished. She was preceded in death by her parents and husband. A Celebration of Life service will be held on Friday, June 10, 2022, at 3:00 pm at Indianola Presbyterian Church, 1970 Waldeck Avenue, Columbus, Ohio. Gathering of friends and family will begin at 2:00 pm and a meal will follow the service in the fellowship hall. For those unable to attend in person, please visit https://www.indianolapres.org/ for details on live streaming of the service. The family requests that in lieu of flowers, contributions may be directed to Outdoor Pursuits (https://outdoor-pursuits.org) or Indianola Presbyterian Church (https://www.indianolapres.org).

Deborah Dryden Turoff, 77, went to be with her heavenly family on Wednesday evening, May 18, 2022, following a battle with dementia. Debby was surrounded by her family and cherished caregivers at Kemper House Worthington. Debby was born on... View Obituary & Service Information

The family of Deborah Dryden Turoff created this Life Tributes page to make it easy to share your memories.

Deborah Dryden Turoff, 77, went to be with her heavenly family...

Send flowers to the Turoff family.