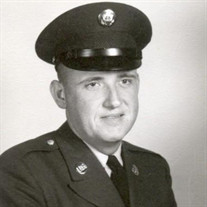 David &#8220;Dave&#8221; George Henson, age 80, of Columbus Ohio, passed away peacefully on May 4th, 2021 with his children at his side. Army Veteran of the Korean War, retired semi-truck driver. David was preceded in death by his Spouse, Mary... View Obituary & Service Information

The family of David George Henson created this Life Tributes page to make it easy to share your memories.

Send flowers to the Henson family.