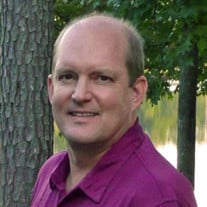 David Gregory Stewart passed away on December 27, 2020 at Riverside Methodist Hospital in Columbus, Ohio. He was preceded in death by his mother Sheila (Hines) Tennant, and is survived by his wife of 35 years, Lori (Guenther) Stewart, his father Clarence and stepmother Diane Stewart, sister Rebecca and brother-in-law Mark Feldbush, nieces Tegwen and Beatrice Feldbush, and brother-in-law and sister-in-law Tim and Betty Guenther. Dave was born August 10, 1960 at Lockbourne Air Force Base, Ohio. His family moved several times during his father’s Air Force career, taking them to Maine, West Virginia, California and back to Ohio, settling down in Mount Vernon when Clarence retired. Dave met Lori on a blind date set up by mutual friends, and before long knew this was the woman he wanted to spend his life with. The two were married on June 15, 1985, in Crestline, Ohio and celebrated 35 years together this past summer. After living a short time in Bellville, Ohio, they moved to Columbus and put down roots. As personal computers became popular in the 80’s, you could often find Dave tinkering with his latest acquisition— adding memory, upgrading video or sound capability, etc., and always on the lookout for the next cool thing. He studied computer programming and information technology in his time at Andrews University (Berrien Springs, MI), Mount Vernon Nazarene University (Mt. Vernon, OH), and The Ohio State University in Columbus where he earned his Bachelor of Science degree in Computer and Information Science. His sharp mind and aptitude for tech served him well as he pursued his career, working for The State of Ohio, Wendy’s QSCC, Quick Solutions, and most recently at Quantum Health as a database architect. Dave was generous with his expertise, becoming the go-to tech support for his family and friends. He even taught his sister Becky to format professional-looking school papers on a cutting-edge Tandy computer from Radio Shack while her fifth-grade classmates did theirs on typewriters. Any time he upgraded his home system, his dad and other friends would benefit from his “hand-me-downs” (which he, of course, provided full setup and regular maintenance on). Dave and Lori loved to travel together— visiting family and friends as well enjoying vacations with just the two of them. On one occasion, they went tent camping in the Smoky Mountains, only to be rained out by a fierce autumn storm. Fortunately, that didn’t dampen their enthusiasm for camping, though they did decide to upgrade to a camper. Over the years they shared a passion for RVing—taking frequent trips to campgrounds around the country and making many great friends along the way. Dave was the person who, in most any situation, knew exactly what to do next. He was detail-oriented and methodical, with sound reasoning behind everything he did— and offered solid advice on everything from the best routes to avoid traffic to the proper way to fill a burrito. He was thoughtful and kind— frequently taking the time to clear the neighbor’s sidewalks and driveways whenever he pulled out the snow blower to do his own. A gifted story teller with a quick wit, he never failed to make his loved one’s smile. He was taken too soon and will be greatly missed — but there is comfort in memories and stories shared and the mark David has left in all those around him. Donations in his honor can be made to The American Heart Association at www.heart.org or the American Diabetes Association at www.diabetes.org/donate in lieu of flowers.

David Gregory Stewart passed away on December 27, 2020 at Riverside Methodist Hospital in Columbus, Ohio. He was preceded in death by his mother Sheila (Hines) Tennant, and is survived by his wife of 35 years, Lori (Guenther) Stewart, his father... View Obituary & Service Information

The family of David G. Stewart created this Life Tributes page to make it easy to share your memories.

David Gregory Stewart passed away on December 27, 2020 at Riverside...

Send flowers to the Stewart family.