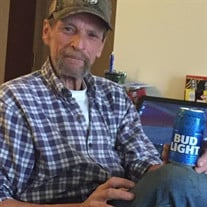 Daryl Tod Snyder, 64, passed away October 2nd due to complications of lung cancer. He put up a good fight and tried to beat the odds but apparently, he was more valuable in heaven. His passing was sudden, we truly thought we had more time with him, so there was no time for family members to be by his side except for his mother. He and his mother had an amazing and close relationship so we all take comfort in knowing she was there to comfort him as he passed into the arms of our Lord. Daryl was born on September 21, 1957 in Columbus Ohio to his loving parents George F. Snyder and Irene F. Snyder. He is proceeded in death by his father, wife Michelle Snyder, sisters Valerie Speakman and Tammy Weidner, and brother George Snyder Jr. He is also proceeded in death by great nephew James Millay. He is survived by his sons whom he adored, Zackariah Snyder and Corey Snyder. Daryl was so very proud of his boys and would talk about them any chance he got. His other survivors include his sons’ mother and friend Charlene Combs, his loving mother Irene Snyder, sisters Lucy Snyder and Irene (Shawn) Millen, numerous nieces and nephews and great nieces and nephews. Daryl is also survived by lifetime friend Richard “Dick” Wood. Daryl graduated from Walnut Ridge High School in 1975. He went from there to various jobs including several years of driving a truck cross country, he tired of being on the road and away from family but still liked driving trucks. His latest job was moving trucks around for Amazon and LBrands. He made many good friends at those jobs. Daryl loved nothing more than get togethers with family and friends. The more the merrier, there was nothing better than a good party! He also liked cars: driving cars, car shows, working on cars. You could always find him tinkering on something. He was also a huge Ohio State Buckeyes fan. Daryl did not want the traditional funeral. His request was to be cremated and to have the biggest party that could be had. His wishes will be honored. There will be a Celebration of Life held on October 24th at Daryl’s home. One of the suggestions for a Celebration of Life is to hold it at a place of meaning. Daryl loved his house and would be thrilled to know his family and friends were enjoying it one last time. Please join us between 12pm and 6pm. We will have sandwiches and snacks to eat while we reminisce and share stories. There will be a short service at 2pm. If you would like to speak during this time please let us know. In lieu of flowers donations may be made to OSU Cancer research.

Daryl Tod Snyder, 64, passed away October 2nd due to complications of lung cancer. He put up a good fight and tried to beat the odds but apparently, he was more valuable in heaven. His passing was sudden, we truly thought we had more time with... View Obituary & Service Information

The family of Daryl Tod Snyder created this Life Tributes page to make it easy to share your memories.

Daryl Tod Snyder, 64, passed away October 2nd due to complications...

Send flowers to the Snyder family.