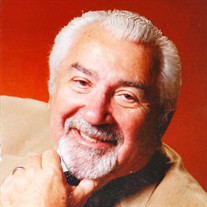 On November 13th, 2020, Darrell “Butch” Olinger, loving husband and father, passed away at the age of 78. Darrell was born on September 18th, 1942 in Chili, OH to Russell B. and Iva M. (Kleinknecht) Olinger. He was the youngest of 9 children. He was in the graduating class of 1960 of Fresno HS and an honorary member of the Worthington HS class of 1959. Darrell briefly attended The Ohio State University before serving in the US Army and doing a tour in Germany as an ambulance driver. A master salesman, Darrell later started his own business, Transportation Accessories Company, which he and his son developed into a successful nationwide enterprise. On August 10th, 1973, he married his wife of 47 years, Stephanie Louise Stimmel. Darrell was the proud father of Lorre (Gary) Locklear, Danny (Diane) Olinger, Amy Looker Runyon, Darylynn Denise (Andrew) Ross, Kevin (Miriam) Looker, and Mark (Rachelle) Looker. He was a beloved “Pa” to Joshua (Brooke) Hedrick, Alexyss Hedrick, Thadeus Ross, Katharine Olinger, Gabriella Ross, Daniel Olinger, Maya Looker, Kristin Olinger, Owen Looker, David Olinger, and Julia Looker, and great grandchildren Scout and Jude Hedrick. Darrell is also survived by sisters in law Margery Olinger, Reva Olinger, and Danielle (Sandy) Wright, brother in law Dick (Donna) Stimmel and many cherished nieces and nephews. Darrell had a lifelong love of sports. As a teenager, he started coaching and spent many years as a youth league coach. He also loved to tell of his time as an athletic trainer at OSU. He was a loyal Buckeyes and Indians fan, and often told the story of his first Indians game where he got an autograph from Bob Feller. Darrell loved to fish at his lake house at Candlewood Lake and in Canada. Everyone remembers his collection of Native American prints and paintings that hung at the Pa’s lake house. His greatest joy was spending time with his family at the lake house and hosting the Olinger reunion there. Darrell was also an avid reader, which he credited to his mother’s love of reading, and was a world traveler. Along with his parents and Stephanie’s parents, he is preceded in death by daughter Amy Looker Runyon, brothers, Larry, Harvey, Clifford (Doris), Frank (Hazel), and Roger (Margaret) Olinger and sisters, Lucille (John) Miller, Peggy (John) McCrea, and Emma (Jim) McCrea. A funeral service will be held on Wednesday, November 25th at 10am at the St Peter's Catholic Church, 6899 Smoky Row Rd, Columbus, OH 43235, where Darrell was a long time member. Interment will be at Resurrection Cemetery immediately following the funeral. A celebration of life will be scheduled at a later date. The family wishes memorial contributions be made to the Central Ohio Diabetes Association. Condolences may be sent to www.rutherfordfuneralhome.com.

The family of Darrell "Butch" Olinger created this Life Tributes page to make it easy to share your memories.

Send flowers to the Olinger family.