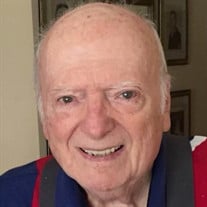 Daniel J. Duggan, Jr., age 89, a resident of Columbus, OH, since November 12, 2019, formerly of Rocky River, OH and North Olmsted, OH, passed away on January 7, 2021. He was born in Chicago, IL on January 25, 1931. Beloved husband of the late Patricia Baka Duggan to whom he was married for 57 years; loving father of Daniel, Michael, Pamela (David) Kreidler, Paula (Chester) Sokolowski, and Patricia (John) Barbato; grandfather of Evan Hullinger, Chester Sokolowski and John Barbato; son of the late Dr. Daniel J. Duggan and Genevieve (Balthazar) Duggan of Oak Park, IL; son-in-law of the late Joseph and Irene (Janus) Baka of Chicago, IL; brother of the late Regis (Joan) Duggan, the late Dr. William (Ann Benge) Duggan, Genevieve (Donald) Hennessy, Mary Lee (Dr. Joseph) Burke and Stephen (Anne) Duggan; brother-in-law of the late Geraldine (the late Robert) Peters, the late Joseph (Marilyn) Baka and Eileen (the late Roy) Netahlo; nephew of the late Dr. Eugene Balthazar; uncle, cousin and friend of many. In his youth his family enjoyed yearly fishing and swimming vacations at Deerskin Lake, WI. He graduated from Loyola University Chicago with a B.A. Degree in Sociology, and then joined the U.S. Navy for four years. Next he enjoyed a long career in sales and marketing of home electronic products for Motorola in Chicago, GTE Sylvania in Indianapolis and Sony in Cleveland where he retired as Regional Sales Manager. A devoted Catholic, he volunteered his time and services to the parishes that served him and his family. He was an altar boy at Fenwick High School, Oak Park, IL; an usher at St. Gile’s Church, Oak Park, IL; served at St. Celestine’s Church, Elmwood Park, IL; a hall guard for CCD at St. Matthew’s Church, Indianapolis, IN; Eucharistic Minister at St. Richard’s Church, North Olmsted, OH; attended daily Mass at St. Peter’s Church, Columbus, OH, at St. Bernadette’s Church, Westlake, OH and Our Lady of Victory Church, Andover, OH. When he was 83 years old he painted Our Lady of Victory Church with 20 gallons of paint. He was an Assistant Scoutmaster for the Boy Scout Troup of North Olmsted, OH. During retirement he collected and delivered donated food items to 17 Cleveland area hunger centers. He found ways of helping the less fortunate, one day giving his shoes to a young boy he saw who was without shoes. He enjoyed retirement summers with his family and friends at Pymatuning Lake, Andover, OH. A Funeral Mass will celebrate his life on February 5, 2021 at 10:00 AM at St. Richard’s Church, 26855 Lorain Rd., North Olmsted, OH. There will be no visitation. In lieu of flowers, memorial donations may be made to: The American Cancer Society.

The family of Daniel J. Duggan, Jr. created this Life Tributes page to make it easy to share your memories.