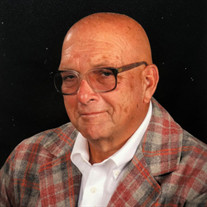 Chuck Schierbeck, 78, of Worthington, passed away peacefully on January 14, 2022. He was born to the late Virgil and Lucille (Whiteford) Schierbeck on October 30, 1943. He was also preceded in death by daughter, Catherine Marjorie. Chuck was a devoted follower of Jesus Christ, loving husband, father and grandfather. Chuck graduated from North High School and Franklin University. He in served the United States Air Force and was honorably discharged in 1968. Chuck enjoyed spending time with his family, giving to the community and refereeing soccer, which he did for over 35 years. He loved the soccer community and developed many lifelong friendships. Chuck faithfully donated blood to the American Red Cross, giving over 23 gallons during his lifetime. He was a member of Indianola Church of Christ, Westerville VFW and Sons of American Revolution. Chuck took great pride in researching his genealogy and that both of his daughters are also members of the Daughters of the American Revolution. Chuck is survived by his loving wife of 50 years, Nancy Kaeser Schierbeck; daughters, Nann (Mike) Williams, of Westerville, Ohio, Gretchen (Tim) Nye of Cardington, Ohio; son, Charles (Debbie) Schierbeck II, of Delaware, Ohio; grandchildren, Blake, Mason and Abbey Williams, and Evan and Myah Schierbeck. Also survived by sister, Shari (John) Scull of Worthington, Ohio; sister-in-law, Katy Rasor of Dublin, Ohio; brothers-in-law, Dick (Marti) Kaeser of Brigham City, Utah, Don (Cathy) Kaeser of Ashland, Ohio, and Ken (Jeanette McDonald) Kaeser of Reynoldsburg, Ohio. Chuck is survived by numerous cousins, nieces, and nephews. A calling hour will be held Monday, January 24, 2022 from 10 am to 11am at Worthington Christian Church, 8145 N. High St., Worthington, Ohio, with a Service to follow at 11 am. Interment with military honors by the U.S> Armed Forces will follow at Kingwood Memorial Park. In lieu of flowers contributions can be made to the American Red Cross or The Wounded Warrior Project. The family would also wish to extend a special thanks to Brad Coleman, of Complete Canine for taking care of Chuck’s boys, his beloved dogs- Woody and Urban, during his illness. The family took great comfort in knowing that they were getting the best care during his absence.

Chuck Schierbeck, 78, of Worthington, passed away peacefully on January 14, 2022. He was born to the late Virgil and Lucille (Whiteford) Schierbeck on October 30, 1943. He was also preceded in death by daughter, Catherine Marjorie. Chuck was... View Obituary & Service Information

The family of Chuck V Schierbeck created this Life Tributes page to make it easy to share your memories.

Send flowers to the Schierbeck family.