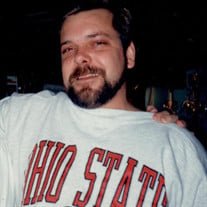 COULSON, Christopher David “Kit”, age 59. Born April 22, 1961, Toronto, Ontario, Canada. Died at home October 3, 2020, surrounded by family. Preceded in death by his mother, Ellen Coulson, Kit is survived by his wife Sherrie Owens Coulson, father Ray Coulson, sister Lynn Coulson, daughter Leslie Coulson Basinger (Bobby), son Jake Coulson, grandson Brennan Basinger, granddaughter Lilah Basinger, bonus daughters Vanessa, Elizabeth, Samantha and Cassie and many, many other extended family, cousins, and friends. Kit was a very passionate man and lived life to the fullest. Although he proudly held onto his Canadian heritage, remaining a Canadian citizen until the end, as a sports aficionado, he fully embraced the state of Ohio, loyally supporting his Browns, Buckeyes, Indians and Blue Jackets. He was a star basketball player in his early years and later an avid golfer, continuing to golf even after his debilitating stroke. Kit made his living as an over-the-road owner/operator of an 18-wheeler red Peterbilt of which he was very proud, and later as a Dispatcher. A legacy that will not be left in vain. The full embodiment of the term ‘unconditional love’ radiates from our hearts every time we think of him. This man wished not even the slightest ounce of hatred on anyone, cared for his family and friends to the end of the earth. All of his trademark characteristics really showed through when his entire life was changed, stripping him of his livelihood. The inability to work, read, write, even speak what his mind wished to say but was unable to verbalize had to be beyond frustrating to say the least, but he accepted it as it was and handled it admirably. While many may become bitter over what life has dealt them, he remained diligent and positive with an uplifting charm, infectious sense of humor, and a very deep love for his loved ones. He will be tremendously missed by his entire family, extended family, friends and any soul he ever touched. His legacy will forever be lived out and instilled in every one of us. Family will receive friends at Rutherford-Corbin Funeral Home, 515 North High Street, Worthington, Ohio 43085, on Saturday, October 10, from 2-4 pm, with a memorial service following directly afterward. Please consider donating to the American Cancer Society or the American Stroke Association. Condolences to www.rutherfordfuneralhomes.com

The family of Christopher David "Kit" Coulson created this Life Tributes page to make it easy to share your memories.

Send flowers to the Coulson family.