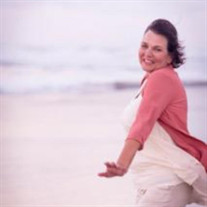 Three little chickadees said goodbye to their beautiful mom on Mother’s Day 2022. They miss their mom tremendously but are so grateful for the time that she had on earth. Oh what a time it was….Christy sure lived life to its fullest, spending time with family and friends daily. She would want you to smile warmly and maybe laugh as you recount the memories. As you recall your memories of Christy, please pay attention and “be here now”. Christy firmly but kindly reminded others of this concept when they were too distracted to listen to her sage advice, hilarious jokes, or thoughtful questions to learn more about others and their relationships. Christy was a phenomenal mother, daughter, grandma (affectionately called “Mana”), sister, cousin, aunt, friend, boss, teacher, and a source of light for many. Her bright light shone on so many who were touched by her fun loving personality and approach to life. She had a way with words which communicated her deep care and made so many people feel very special, loved, and important. She saw the best in everyone and gave others a great deal of grace. Christy was the most patient and loving caregiver to her mother, Joann Ryser, and never left her side while she was under her care. Christy loved to act in plays and participate in Youth Group with her Brookhaven High School friends. After she graduated from OSU, hard work continued to be important to Christy. At Bank One, she launched and led the Home Equity Division and even dressed up as a house and starred in some of their print advertisements and television commercials. Her first career was as an elementary school teacher and she later served as a substitute teacher after retiring from the banking industry. She was a teacher at heart and loved all children. She taught all of her grandchildren the Lord’s Prayer, how to swim and even held “Summer Camp Mana” where she taught them lessons and created many memories that her grandchildren will cherish forever. Even more important than work Christy cherished the relational time she had with others and loved to celebrate with beach vacations…..it was even better if it was a last minute beach vacation. Often her girls Jennette (Greg) Lawson, Allison Herrera, Mandy (Cole) Bragg and her grandchildren (Kai, Auggie, Xander, Tavie) were at her side on these infamous beach vacations. Later in her life as she was focused on living her final years to their fullest, she vacationed even more with her brother Scott Caldwell, her cousins, her life long friends, and her nieces and nephews. All were welcome in Christy’s beach house (as long as you acknowledged that she was in charge), as her heart was so generous and she wanted everyone to enjoy the beach, ocean waves, and a nice cool 12 o’clock drink to celebrate it all! She liked to sit in a low beach chair where the tide barely rolled in….her feet in the sand, the sun absorbed into her skin with Avon Skin So Soft, and her jewelry and visor on while flashing her welcoming smile. Her trusty sidekick Earl, the luckiest miniature yorkie in the world, was always by her side. Christy was a most unique and special woman who was a source of warm comforting light for many. She will be cherished forever. She was surely welcomed into Heaven by those who have gone before her: Joann W. Ryser, Raymond H. Clark, Jack R. Caldwell ,Sara Clark ,and Ray W. Ryser. In lieu of flowers, donations to the Church of the Good Shepherd, where Christy attended, worked, and taught Sunday School will be graciously accepted. In honor of Christy, her loving family will be receiving guests Saturday May 14th at 10am with an 11am service at Church of the Good Shepherd 6176 Sharon Woods Boulevard Columbus Ohio 43229.

Three little chickadees said goodbye to their beautiful mom on Mother&#8217;s Day 2022. They miss their mom tremendously but are so grateful for the time that she had on earth. Oh what a time it was&#8230;.Christy sure lived life to its fullest,... View Obituary & Service Information

The family of Christine B Caldwell created this Life Tributes page to make it easy to share your memories.

Three little chickadees said goodbye to their beautiful mom on...

Send flowers to the Caldwell family.