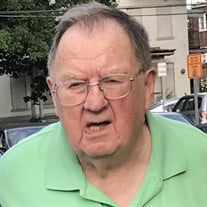 Charles L. Swain, Jr., age 87 of Delaware, Ohio died June 9, 2021 in Columbus, Ohio. He was born March 17, 1934 to Charles L. Swain, Sr. and Elsie Swain in Cambridge, Ohio. He married Judith Ann Wagner on June 17, 1972 in Worthington, Ohio. He was a concessionaire for most of his life and a warehouse worker. Charles was a member of the Methodist Church and Ohio Showman’s Association and was awarded the Lifetime Achievement Award in 2016. He proudly served in the U.S. Army. He is survived by his daughter, Sherilin Sibert; sons, Glynn (Kathy) Swain and C. J.(Jill) Swain; grandchildren, Dominic, Andrew, Jacob, Christopher, Abigail and Ethan. He was preceded in death by his beloved wife of 48 years, Judith and most recently by his brother, Jimmy and sister, Patti. Visitation will be held 11:30 am-12:30 pm with a service at 12:30 pm, Tuesday, June 15, 2021 at RUTHERFORD-CORBIN FUNERAL HOME, 515 High St., Worthington, Ohio. Burial will follow.

The family of Charles L. Swain Jr. created this Life Tributes page to make it easy to share your memories.

Send flowers to the Swain family.