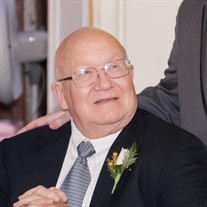 On Wednesday, May 12, 2021, Charles “Chuck” Kemp passed away at the age of 82 at Brookdale Trillium in Columbus, Ohio. Chuck was born on September 13, 1938 in Columbus, Nebraska to Leonard and Mildred (Harris) Kemp. He received his engineering degree from the University of Utah and began his engineering career working for Bell Laboratories in Holmdel, NJ. He met his wife, Lois Cotten Kemp in Red Bank, NJ and they married on July 25, 1964. They raised one son, Leonard, and two daughters, Suzanne and Kimberly. Chuck had a passion for many hobbies and activities throughout his years. He took his family on many camping trips across the United States. He enjoyed golf, stained glass, woodworking, wood turning and many other hobbies. He was a longtime member of the Linworth United Methodist Church, Worthington Kiwanis and Columbus Ohio Woodworkers. He enjoyed corvettes and owned a few over the years, as a young newlywed, he and his wife Lois drove their corvette across county from New Jersey to California for their honeymoon. One of his last trips in his newest Corvette was a trip to North Carolina with his daughter Kim to visit his wife’s brothers, their spouses and their children. He enjoyed a good scotch, Strawberry milkshakes from McDonalds, popcorn and twizzlers. Chuck was preceded in death by his parents Leonard and Mildred Kemp, his half-brother Glenn Tabor and half-sister EvaJane McMeekin, his loving wife of 33 years, Lois Cotten Kemp (1997) and daughter, Suzanne Kopko (2015). He is survived by his son and daughter-in-law, Len and Kathleen Kemp, of Dublin, OH, son-in-law, Keith Kopko of Lakewood, OH, daughter and son-in-law, Kim and Steve Stirn of Metamora, IN, grandchildren, Jack Kemp, Connor Kemp, Nathan Kopko, George & Henry Min, Lauren, Alex and Emily Stirn and many cousins, nieces and nephews. A Memorial Service for Chuck will be on June 5th at 3:30 at Linworth United Methodist Church. In lieu of flowers, donations may be made to American cancer society in memory Chuck Kemp.

The family of Charles "Chuck" Kemp created this Life Tributes page to make it easy to share your memories.

Send flowers to the Kemp family.