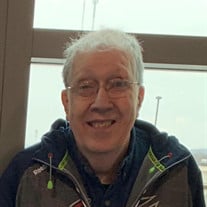 Charles L. Davis of Westerville died on November 13, 2020 from complications of Covid 19. Charles was born to Willard and Doris Davis, on July 14, 1945. He is preceded in death by his parents and his brother Cary. He was the beloved husband of Rosamond (Hummer) for 54 years. Their love for each other was shown through daily love notes and hundreds of small routines and inside jokes. Charles is survived by four devoted children, Brian, Beth (Godshall), Kara (Daniele) and Katie (Brooks), and a cherished son-in-law Jeremy Brooks. He had seven grandchildren who called him Papa: Aiden, Amara, Evan, Jillian, Kathleen, Matthew and Megan. He is also survived by his brother Carl (Betty), a loving aunt Grace Roush and her family, many sisters and brothers-in-law of the Bauer, Hummer, and Lynch families, especially Clare, Jim, Anne, and Mark, numerous nieces, nephews, cousins and valued friends. Despite being born in Plain City, Ohio, Charles was far from plain. He was a man with many names, depending on the company he was keeping. Some knew him as Charlie, while work colleagues and friends called him Chuck and CL—but being called Papa was by far his favorite name. Charlie served in the Army from 1966 to 1968 in Vietnam as a MP Sentry Dog Handler. He went on to build a family while working as a retail manager, before beginning a 20-year career with the State of Ohio Auditors office. He was an avid sports fan, loyal to the Cincinnati Reds and he devoted every fall to the Cleveland Browns, always waiting for next year. Charlie loved the Ohio State Buckeyes, and enjoyed attending bowl games, and NCAA tournament games with his family. He was the proud founder and administrator of the Davis Family Football Pool, and made his picks like clockwork every Thursday. Charlie would be happy to know that the Browns won this Sunday and he was the winner of the week. Those who love him describe him as hard working, kind-hearted, organized, selfless, mild mannered, and even-tempered. His last happy memory was voting for Joe Biden, and seeing him declared President-elect. Charlie was reserved, with a quiet sense of humor, and will be remembered for his loyalty, understanding, care for his family and for his unwavering love of Rosamond. Due to the pandemic a memorial to celebrate his life will be held at a later time. The family requests donations be made in his honor to the ACLU Legal Defense Fund. Condolences may be made to the family at www.rutherfordfuneralhome.com

Charles L. Davis of Westerville died on November 13, 2020 from complications of Covid 19. Charles was born to Willard and Doris Davis, on July 14, 1945. He is preceded in death by his parents and his brother Cary. He was the beloved husband... View Obituary & Service Information

The family of Charles L Davis created this Life Tributes page to make it easy to share your memories.

Send flowers to the Davis family.